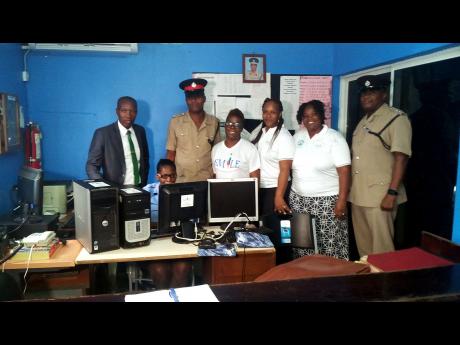 The presentation of the computers was done this week by councillor for the Independence City division, Courtney Edwards. The items were made available to him by the non-profit organisation Growth Foundation. The Caymanas Police Station received two of the computers while Waterford was presented with one.

Edwards told Rural Xpress that after carrying out a needs assessment at the two police stations, he realised that they could improve their efficiency in many areas if they had these computers. "With Local Government Month being celebrated in November, I wanted to do something tangible, I thought about what I could do to help institutions in my division in a meaningful way," said Edwards.

"I took a look at the two police stations in my division and, given the fact that we are focusing on an anti-crime drive, and the police expressed the need for these computers, I decided to fulfil their request," he added.

According to the councillor, he sought the assistance of the Growth Foundation in acquiring the computers and they obliged. "I want to thank the Growth Foundation, a non-profit organisation, whose directors did not hesitate to assist when they were approached," Edwards stated.

Inspector Mark Goffe, station commander at the Caymanas Police Station, along with the zone commander, Assistant Superintendent Charles Cain, received the items on behalf of the Jamaica Constabulary Force.

Goffe expressed profound gratitude to the councillor, while acknowledging that the computers will go a far way in enhancing efficiency at the station: "We are extremely grateful for these computers. They will greatly help to enhance data collection and storage for easy access, while reducing the turnaround time in preparing reports for members of the public.

"Also, they will be instrumental in data-sharing between us and other stations. Now we will have information from other stations at our fingertips as a part of the information-sharing process," Goffe told Rural Xpress.

Assistant Superintendent Charles Cain was also complimentary in his remarks, thanking the councillor for the computers, while praising the inspector for improving the delivery of service to the public at the station.

EDITOR'S NOTE: This article has been amended to reflect the correct division that councillor Courtney Edwards represents.