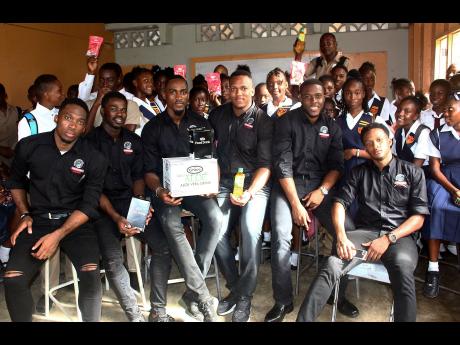 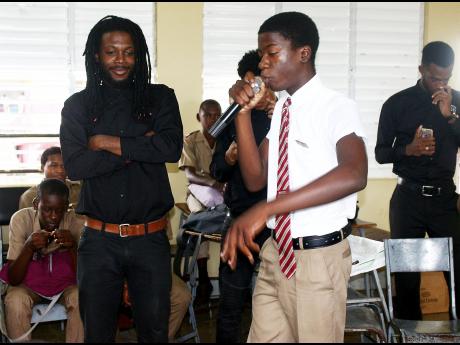 Last Friday, the parish of St Thomas was treated by a group of males from the Leadership Academy of the Elsa Leo-Rhynie 'Towers' Hall of the University of the West Indies (UWI), Mona campus.

In keeping with the academy's outreach programme, which aims to educate boys in public schools about the importance of completing secondary education and moving on to the tertiary level, the team of 25 males visited three high schools - Paul Bogle, Morant Bay and St Thomas Technical. The group was also joined by several national and UWI scholarship athletes, who interacted with the boys at each school.

The athletes were Michael O'Hara, Jaheel Hyde, Traves Smikle, Martin Manley, Zavaan Richards and Hansle Parchment, who is a seed of the St Thomas soil and a past student of the Morant Bay High School.

Among the topics discussed were male marginalisation, living in single-parent households, challenges of inner cities, self-esteem, anger management and managing distractions in school. The presenters not only outlined the causes and effects of these issues, but provided solutions by sharing personal experiences. The students found the testimonies relatable, thus rendering the discussions highly interactive, as some students used the opportunity to provide recommendations about how their classmates could cope with the various challenges.

To top things off, the students were kept entertained with performances from up-and-coming singer and songwriter Dburnz.

Team lead Bertram Anderson, who serves as the student services and development manager at 'Towers' Hall, and is also a St Thomas native, told Rural Xpress that the academy was formed two years ago and the tour began last month in Portland, where they also visited three schools.

Anderson said last Friday's visit to St Thomas was well received. According to him, "The principals expressed their gratitude for the group having visited and sharing with the students, as the initiative will give them a sense of purpose and hope in respect of where they want to go and what it takes to get there."

Anderson explained that the team was divided into two groups, with one comprising all the athletes. The sportsmen, three of whom recently graduated from UWI, shared their experiences with the student athletes. The national athletes shared their stories of how they overcame with much sacrifice and hard work, and also underscored the importance of academics. The students were encouraged that talent and academics work together, and when they do, greatness is produced.

Olympic hurdler Hansle Parchment couldn't conceal his passion while he shared, having been in their seats just a few years ago. He urged the young people to reach for the highest and to seize every moment, just as he did, despite their personal challenges or hardships faced as a parish.

Parchment concluded by encouraging the students to give back and help another whenever they themselves have overcome as, according to him, that is the true definition of empowerment.