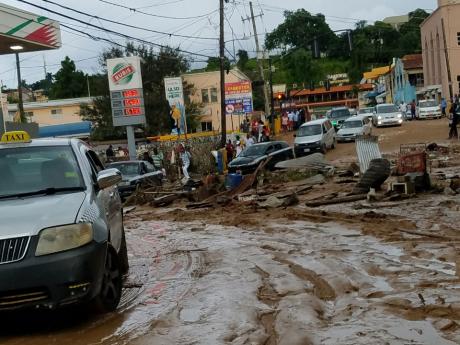 Mayor of Montego Bay Homer Davis is advising people to avoid the western city today as workmen begin to clean up streets left in ruins by a massive flood yesterday.

“The city is looking ugly,” Davis said this morning on Independent Talk on Power 106FM. “Downtown Montego Bay is not what it used to be.” He said the authorities will be blocking off several streets to reduce potential congestion in the muddy town centre as large equipment clear away silt, garbage and other debris.

While commercial activities are expected to get a hit, the mayor says operations at the St James courthouse have also been affected.

He said yesterday, cars parked at the courthouse were covered and the building flooded. According to Davis, Montego Bay yesterday received three to four hours of heavy rains, not witnessed in many years.

In the meantime, schools in Montego Bay have been ordered closed.

We want to hear from you! Send us your photos and videos at editor@gleanerjm.com or onlinefeedback@gleanerjm.com