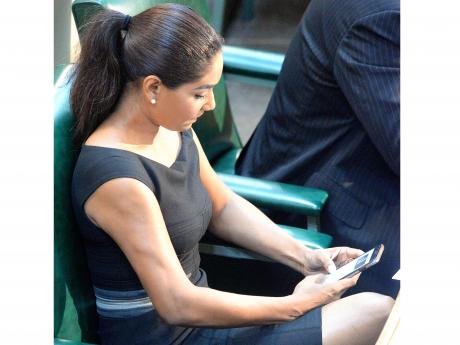 St Ann South East MP Lisa Hanna set off a series of comments and criticisms on Wednesday when she turned up in parliament what was perceived to be a sleeveless dress.

A cap sleeve extends only a short distance from the shoulder and tapers to nothing under the arm.

"You know she is wrong," Cuthbert Flynn said in cross talk with some Opposition MPs.

At one point Hanna was overheard saying: "Raise it on a Point of Order", suggesting to her critics that they should bring the matter to the attention of Speaker of the House Pearnel Charles.

The cross talk over Hanna’s outfit created an obvious distraction while Member of Parliament for St Andrew Eastern Fayval Williams was making her contribution to the State of the Constituency debate.

This triggered the Speaker’s intervention who called for ORDER!

Meanwhile, Charles has written to Hanna reminding her of the dress code as set out in the Standing Orders or the rules of Parliament.

Charles told The Gleaner Wednesday evening that a member of the House had complained about Hanna’s attire.

The Speaker noted that he was prompted to take action against the Opposition MP.

"I simply wrote to her, bring it to her attention and ask that she abide by the rules."

What the Standing Order 84A says:

1. The dress of members and other users of the House must at all times reflect sobriety in order to maintain the dignity and decorum of the House.

2. There shall be strict adherence to the rules.

3. Members’ dress for meetings of the House or Committees should consist of a business suit and necktie for men, and a sleeved business dress or skirt suit of modest length, or pant suit for women.