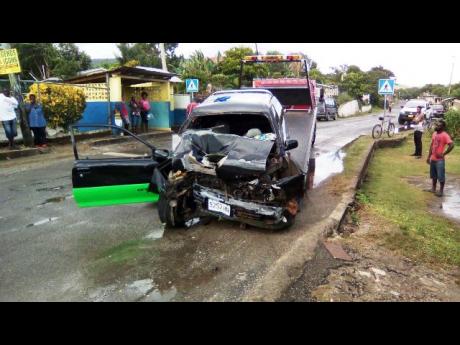 Gareth Davis Snr
The mangled remains of the Toyota Starlet motor car which crashed along the Priestman's River main road in Portland being taken away by wrecker this morning.

A man is dead and two others seriously injured following a motor vehicle crash this morning along the Priestman’s River main road in Portland.

Dead is 25-year-old Jason Estarene, of a Black Rock address, in the parish.

Police reports suggest that Estarene was driving his Toyota Starlet along the Priestman’s River main road, shortly after 4 a.m. with four people aboard, when he lost control of the vehicle and slammed into a wall.

He was pronounced dead at the scene by a doctor, while two of the occupants were rushed to the Port Antonio hospital, but were later transferred to St Ann’s Bay Regional Hospital in St Ann.

The stepmother of the deceased, Norma Powell, says her stepson was transporting persons from a wake in Boston at the time of the crash.

She says her stepson was reportedly making a third trip, when he lost control of the vehicle and crashed.