Gov't to introduce law to regulate sugar content in food 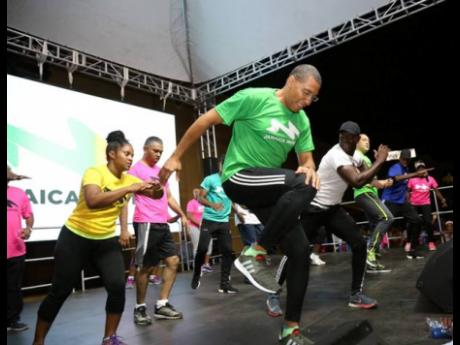 CMC
Prime Minister Andrew Holness moves during the routines at the final staging of the Jamaica Moves series in May Pen, Clarendon.

KINGSTON, Jamaica, CMC – Prime Minister Andrew Holness says the next step in the Jamaica Moves campaign is to take legislation to Parliament to regulate the sugar content in food products.

Holness, who was addressing a crowd in the town of May Pen, Clarendon last week, however said before this step is made, Jamaicans would have to be educated about the ill effects of some of the foods they consume daily.

The prime minister was attending the final in the series of Jamaica Moves road tours hosted by the Ministry of Health.

“Non-communicable diseases (NCDs), such as diabetes, hypertension and stroke, are linked to our lifestyle and how we choose to live. We eat rice, yam, dumpling and banana on one plate and all of that is starch, which converts to sugar. When you have too much of that and you are not exercising, you start to put on weight,” he pointed out.

“We want all Jamaicans to be healthy. We recommend 30 minutes a day of relatively easy exercise, such as walking in the morning; or 30 minutes of moderate exercise daily (which) is good for all of us,” he added.

The prime minister noted that he, too, had recently embarked on a healthier lifestyle by eliminating sugar and artificial sweeteners from his diet, and is encouraging all Jamaicans to either cut down or cut out sugar. He said he had also reduced his fat intake.

“I am also encouraging you to eat more fruits and vegetables, like callaloo and cabbage. We, as a Government, are not just looking at the economy, roads and crime, but we take your health very seriously and are taking the message to you,” he said.

He also led the crowd in a 20-minute workout as he commended Health Minister Dr Christopher Tufton, on doing an excellent job with the Jamaica Moves campaign and for practising what he preaches by exercising daily.

Tufton, for his part, encouraged all attendees to move and participate in the evening’s activities, because “we are trying to get every Jamaican to understand the relationship between physical activity and healthy lifestyle”.

“We have too many Jamaicans dying of heart failure, diabetes and arthritis because they sit too much, eat badly, and before they reach 70 they have to take five to six tablets and live at the hospital and doctor. We don’t want that,” he said.

The health minister noted that “public health is not just about hospitals but encouraging Jamaicans to live healthy lives”.