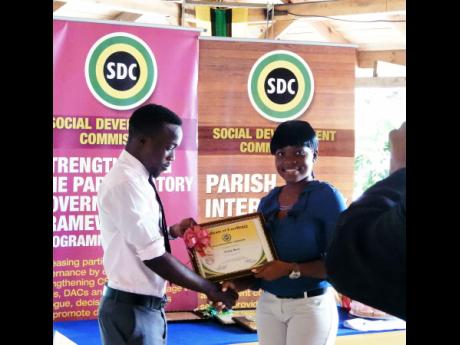 Cecelia Campbell
Nickoy Davis (left), receiving his prize for the Most Influential Youth Leader in Clarendon from Melbourine McPherson of the Clarendon Parish Development Committee 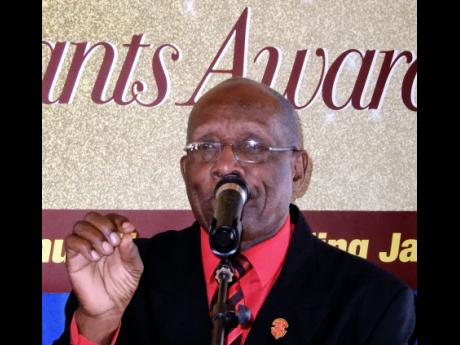 Cecelia Campbell
Principal of May Pen Primary, Winston Preddie fired up the awardees and guests.
1
2

Several of Clarendon's hard-working and dedicated volunteers were recently singled out for recognition for the work they have been doing in their communities at the recently held Social Development Commission's (SDC) Incentives and Grants Award.

Among the awardees were Nickoy Davis, who copped the prize for the Most Influential Youth Leader; Troy Allen, who took the Stewart Morris Plaque for Best Wicketkeeper for 2017; and Noel Browne, who was awarded Outstanding Community Development Officer.

Among the communities that were recognised as positively impacted through the volunteers' work were Spaldings, Rock River, Portland Cottage, and Rocky Point.

During his overview of the awards, parish manager Baldvin McKenzie praised the volunteers and community workers: "Today, the SDC says to the community, thank you for the work you have been doing over the period as we recognise the various community groups that have been impacted." He encouraged other groups that did not receive an award to continue working as "next year it might be you".

McKenzie reported that in recent years, more than $10 million worth of projects had been approved by various agencies for various economic, social, and environmental projects that are now being implemented in the communities.

Custos of Clarendon William Shagoury, while acknowledging the problem of crime, pointed out that some good things were happening in the parish. "We have some good people, and they give back to the community, and that's why we are here celebrating talent and achievement," he said, adding that he must applaud the effort and achievement of those from the parish.

Principal of May Pen Primary Winston Preddie fired up the awardees and guests with the keynote speech, which promoted love of country, volunteerism, loyalty, and the ingredients for success.

"All of us can talk about the successes you need, but have you put yourself in a willing position? Don't expect the world to come knocking at your door to ask what you are doing," he advised. "Everybody want to get to America, we don't have to. Some people think that everything is only good in America. Only two things Jamaica needs the love of country and the love of people. We don't need anything else," Preddie said to loud applause. "If we love people, we won't commit crime; and if we love the country, we will keep it clean," he concluded.