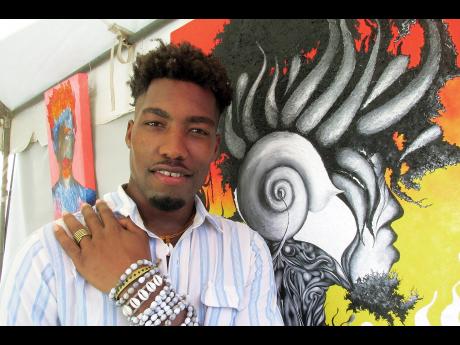 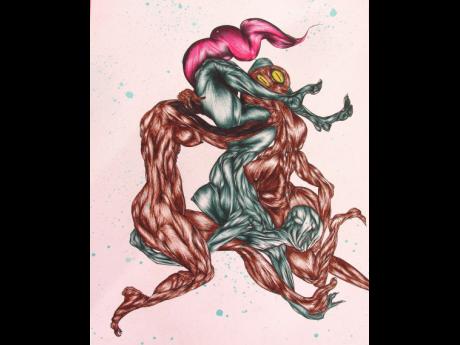 The images in Imuzi Thompson's artwork are quiet unusual. They are not the depiction of living, breathing people, but on his canvass they are oozing life, and tell stories with their twisted, swirling limbs and bodies that look like the skin and fat have been pulled from their muscles.

They created quite a stir at the Liguanea Art Festival last Sunday, and Thompson, of Beaufort, Westmoreland, could not have asked for a better debut. Not only was it his first time at Liguanea, but the 26-year-old surrealist was also exposing his work to the general public for the very first time.

Patrons could not help trying to figure out what his pieces were depicting. They could not take one look. They were seen bending over, turning the pieces, laughing, pointing, smirking, gaping, asking questions. What is going on? Thompson had got their attention, and they stayed, some for several minutes.

The pieces also caught the eyes of Rural Xpress. We spoke with him about his work, and why that particular style appears to be so polarising, drawing people to it, but shocking others.

He smiled when he said, "They like it, but some are scared." But the scare factor is not very intentional; he is simply creating art, doing something different. The muscle-like segments of the images, he said, represent the fluidity of life, how things flow and wrap around one another like muscles, tree barks, and water. They are also about the interrelationships among "beings".

A MIND OF THEIR OWN

Mostly done in ink, Thompson said though the forms are intentional, his pens also seem to have a mind of their own, so he allows them to go wherever they want to go. Yet, there is some amount of guidance bearing in mind the essence of his style.

And the images and concepts are not necessarily a reflection of who he is as a person. His art is the manifestation of his creative imagination, works that provoke thought and engender discussions, a reflection of the elements of our existence.

But, because of the abstract/surrealistic nature of his pieces some people are wary of what they might represent. It has always been like this, since school days, when his art was always different from that of his classmates. They thought him weird. Even his own mother would burn his work. They were too different for her.

Yet, the young man, who attended Knockalva Technical High School, decided last year, with the encouragement of friends and loved ones, to foray into his artistic mind and show the world what is there.

"I was expecting a feedback, I wanted to know how persons would react, and what they would have to say because I know it is something fairly new in Jamaica," he revealed.

He was very happy with the interest in his work, which was as welcoming as his affable personality, and that of his sister and fellow artist, Cristal-AnnThompson. "Pretty impressive!"was how she described her brother's pieces. She liked the "excellent" feedback and said she will be pushing him to do more.

For those who believe his work is somewhat grotesque, his response is, "It's impactful. Once it achieves a particular impact, then my job as an artist is done."