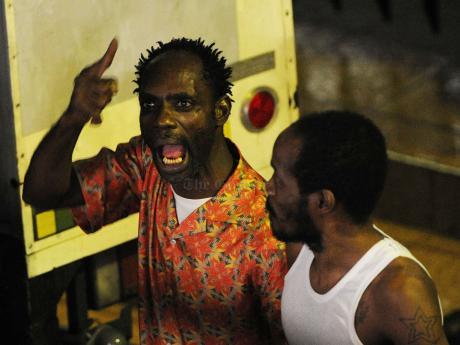 In this November photo Ninja Man and another prisoner being led from Court. - Ricardo Makyn photo

The sentencing of dancehall entertainer Ninja Man and his co-convicts has been put off until Monday.

Ninja Man, whose real name is Desmond Ballentyne, his son Janiel and Dennis Clayton were to be sentenced in the Home Circuit Court today for the 2009 murder ‎of Ricardo Johnson.

The three were convicted last month for the murder in the Lower Mall Road community of Kingston.

However, the sentence had to be postponed because Clayton's attorney was absent and some character witnesses were not available for court today.

The three convicts face up to life in prison.

Following their conviction, Director of Public Prosecutions Paula Llewellyn said the incident with Johnson stemmed from a domestic altercation the day before his demise.

There was a fight, and Ballentyne and the co-convicts returned the following day with guns and other weapons.

They chased Johnson and another witness through a fence, and, as Johnson tried to fend off the attackers, shots were fired and he was hit in the side.

During the trial, the prosecution called a total of seven witnesses including three civilians.

The case, which was first mentioned in court in 2009, had 17 missed trial dates and 23 mention dates in eight years.