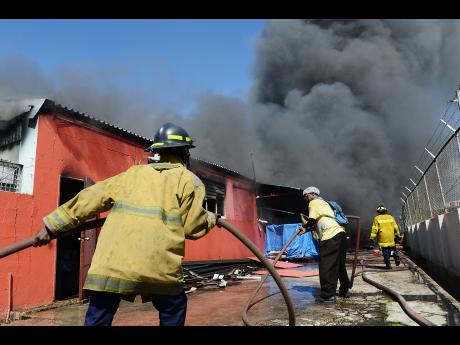 In 2013, there was an estimated 13,207 fire hydrants across Jamaica. Since then, scores of housing schemes have been constructed, several massive buildings have been erected and just a little over 300 new hydrants installed.

But Sean Martin, assistant commissioner of the Jamaica Fire Brigade, last week pointed out that it is not the responsibility of the brigade to install the hydrants.

"It is the responsibility of the developers to install hydrants based on the recommendation from the Jamaica Fire Brigade. Plan developments are submitted for approval. Hydrants are normally recommended based on the development," said Martin, as he noted that the theft of hydrants has contributed to the problem.

"When new schemes are developed and before occupancy, the hydrants are checked and approved by the Jamaica Fire Brigade as functional and serviceable. Over time, they are removed to other areas for use, and the cycle continues," added Martin.

In the meantime, Minister of Local Government Desmond McKenzie is equally concerned about the absence of fire hydrants at new developments.

"It is a serious issue and something that we are working on with the Fire Brigade and the National Water Commission," McKenzie told The Sunday Gleaner.

"What is to happen is that the municipal councils are to ensure that these are in place, and they will not accept developments without them," added McKenzie.