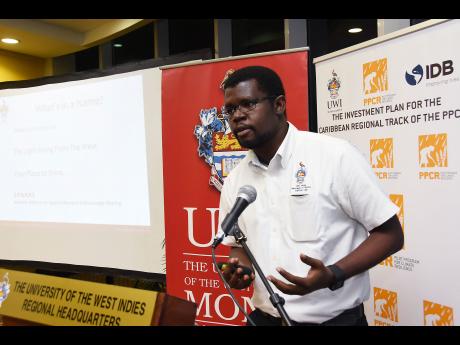 IT'S PALPABLE, Jayaka Campbell's excitement over SPARKS, the supercomputer that is to enhance the Caribbean's climate projection capabilities and help inform its response efforts.

There is little mystery why. In a region expected to be among the worst affected by a changing climate, data is critical to planning, and SPARKS - the Scientific Platform for Applied Research and Knowledge Sharing - offers that data.

SPARKS, funded by the regional track of the Pilot Programme for Climate Resilience (PPCR) through the Inter-American Development Bank and managed by UWI Mona Office of Research and Innovation, is financed under component three of the PPCR, which is being implemented by the Climate Studies Group Mona.

According to Campbell, who works with SPARKS as a data analyst, climate modelling for the Caribbean began in 2005, but it was only in 2009/2010 that modellers received significant data to be able to say something about the region's climate.

"And even then, the resolution was not adequate to report on the smaller islands. Now we can drill right down with SPARKS. For example, drought in the Caribbean is dependent on a number of factors, including the interaction between the Atlantic and the Pacific oceans. With SPARKS, we can now look at the range of possible interactions and investigate these interactions at a level we have been unable to before ...," he explained, clearly thrilled.

"SPARKS now allows us to isolate geographical areas within countries for better resolution. For example, the projected changes on the eastern side of an island may not be the same for the western side. SPARKS allows us to differentiate ... We can provide more refined climate data for planners. This data is useful for farming, construction, health, the work governments do with planning and development - all of which have to take climate into account," Campbell added.

"Even though it is done through the PPCR for the Caribbean, the data will be available to our partners and neighbours in Central America and parts of South America ... We could share beyond the Caribbean," he said further.

For Campbell, 35, there is no problem that science is unable to solve, not with technology like SPARKS.

Such is his passion for science that even before SPARK's official launch in November 2016, Campbell was on the job, inputting and crunching vast amounts of data into the super computing system that would perhaps boggle the minds of many people.

He'd got bit by the computer bug at Camperdown High School and credits former principal Cynthia Cooke for introducing him to the field. She recognised his knack for computers and hired him to work one summer at the school's computer lab to prepare it for the new year.

However, his love for and determination to pursue the sciences did not go unchallenged. There were initial objections from his mother, who wanted him to do business subjects.

"We argued for four nights until my father intervened and said 'That's his calling', and my mother said 'Well, good luck!" said Campbell, who is pursuing a PhD in computational physics.

His mother has since thrown her support behind him, and he now encourages others to enter the field.

"When you do science, people still feel you will not be able to feed yourself. There is a misconception that all you can do is teach. But the prospects are wide and varied. I have been a part of a cohort that has gone on to do many things," he said.

"Some are entrepreneurs because physicists are problem solvers. If you want to figure out how devices work, if you have manual processes that can be automated, an electronics or physics degree can provide the solution. In software and hardware development, even in banking because these sectors use the same language physicists use - math and numbers," he added.