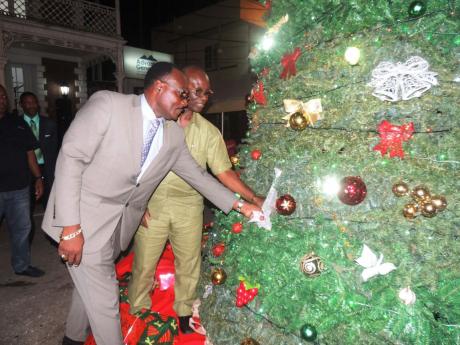 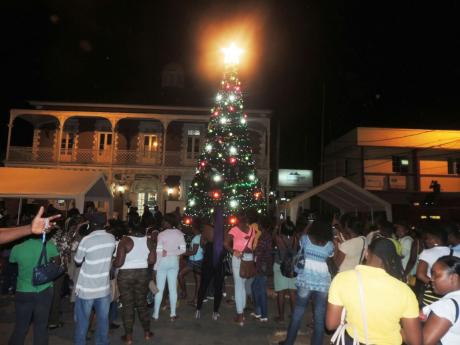 Still fresh in the minds of many is the memory of the horrific deaths of 14 persons, who perished in December 2008, just hours after a Christmas tree-lighting ceremony in Port Antonio, Portland.

Fast-forward to 2017. This time around, nothing sinister took place after dozens of persons turned out to witness the annual Christmas tree-lighting ceremony conducted by Local Government Minister Desmond McKenzie and Mayor Paul Thompson.

Fourteen lights were not on the Christmas tree this time around. Neither were there 14 stars affixed to the tip of the tree, which was the case in 2008, when a truck transporting higglers to the Coronation Market in Kingston plunged over a precipice in the Rio Grande Valley, leaving 14 persons dead.

Instead, there were approximately 28 bulbs and more than 40 stars neatly placed on the Christmas tree, which was heavily decorated with glittery cloth, along with stockings and pepper lights.

"Portland is renowned for its frequent rainfall," commented McKenzie.

He continued: "Tonight, we greet you with blessings for this festive season and urge you to share a little of what you have with your neighbour and the less fortunate. This is a blessed parish with friendly people and many attractions. I want us all to have a safe and happy Christmas and a prosperous new year."

And for his part, Thompson spoke briefly about the 14 persons who perished in a truck accident on December 14, 2008, the same night the Christmas tree-lighting ceremony took place.

"I learned that there were 14 bulbs placed on the Christmas tree that night," said Thompson.

He added: "There were also 14 stars neatly placed at the top of the tree. Whether it was coincidence or otherwise, 14 persons lost their lives, and their memory is still fresh in some of our minds. I am not superstitious, and as for me, it was just an unfortunate accident. Let us all embrace each other this festive season and set aside our differences while looking forward to a year of prosperity in 2018."