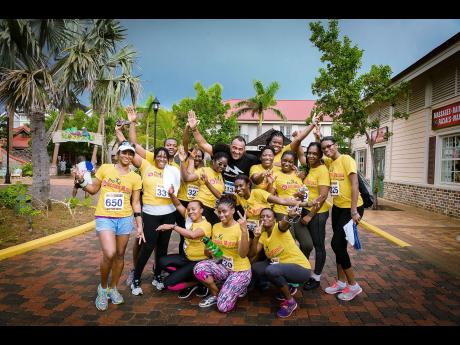 Contributed
Minister of Health Dr Christopher Tofton (centre) with members of the Restaurants of Jamaica team. 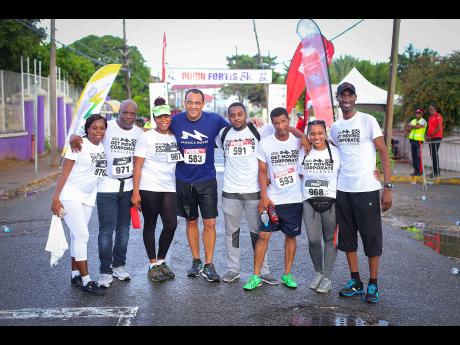 Contributed
Minister of Health Dr Christopher Tofton (centre) with members of the Restaurants of Jamaica team.
1
2

After some four months of friendly performance-based competition involving 16 private- and public-sector companies, the Victoria Mutual Building Society (VMBS) walked away with bragging rights in the first Jamaica Moves Get Moving Corporate Challenge.

The challenge, which started in September, saw the companies entering a maximum of six 5K races and culminating along Negril's famed seven-mile white-sand beach on Saturday, December 2, with the Reggae Marathon, Half Marathon, and 10K.

The VMBS team, which consisted of approximately 30 registered individuals, had members who had never participated in a 5K race before.

Undaunted by the 2 a.m. departure times for the early-morning races out of town, the team members showed up energised and enthused at the start of each race. Those challenging races were true testaments to the dedication of the challengers. What's more, the thrill and satisfaction of competing made the team more determined to keep doing well in each race.

"I must say this challenge has brought a lot of us together. It was through this medium that I met some of my team members. I enjoyed this journey wholeheartedly and if we could start it all over again, I'm in. #teamvm," said Monique Prawl, VMBS challenger.

The Jamaica Moves Corporate Challenge was also a great opportunity for the team members to embrace the organisation's thrust of health and wellness for its members.

Commenting on the success of the team, group president and CEO of VMBS, Courtney Campbell, said: "I am extremely proud of all the team members who represented the Victoria Mutual Group throughout this challenge. Their victory is just reward for their consistently high level of discipline, perseverance and team spirit."

At the end of the challenge, Jamaica National Group received the award for Company Spirit. Male and female champions were Kemar Leslie of Rainforest Seafoods and Geneadel Penglas of VMBS.

Organisation performances were calculated based on the amount of points their members accumulated. Rounding off the top five companies in the challenge were Rainforest Seafoods, Jamaica National Group A and Group B, and Advanced Integrated Systems.

Jamaica Moves is the country's coordinated national response to the increased incidences of non-communicable diseases (NCD). Through education, engagement and the building of supportive environments, the programme hopes to reduce NCDs by 25 per cent by the year 2025.