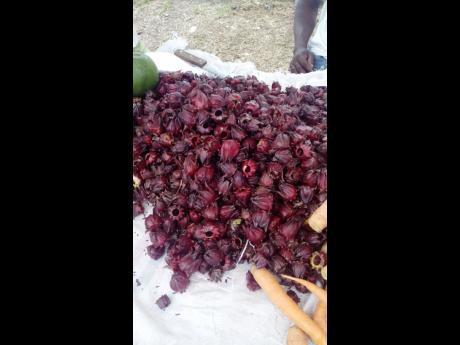 Residents of St Catherine and its environs have a lot of sorrel drink this holiday, as farmers in the parish are reporting bumper yields that they anticipate will extend well into next year.

Some St Catherine farmers told Rural Xpress that, despite increased rainfall, the perennial herb - which is consumed as a prepared drink mainly during the Christmas season in Jamaica - is in abundance this year.

"Oh man, sorrel grows this year well. We see so much that, even way into next year, people will still be drinking sorrel," said Kitson Town farmer Selvin Richards, who participated in the recent Green Acres farmers' market put on by Member of Parliament Christopher Tufton.

"All the other farmers I talk to are having bumper crops. We are only praying that we get the right amount of rainfall so the crop won't spoil," he continued, while disclosing that many farmers have already lost hundreds of pounds of sorrel because of the recent heavy rains.

Clive McCloud, farmer of Blue Hole in St Catherine, who also reported increased yield in his sorrel cultivation this year, said although he was affected by the heavy rains and experienced significant losses, he reaped huge crops.

"Several pounds (of sorrel) spoil because they get too much rainfall; but it is a big crop this year, so I have a lot to take to market," he said.

Checks by Rural Xpress revealed that the average price this year for a pound of sorrel varied from $130 to $150, no significant decrease when compared with previous years.

"Regardless of the price, people will always buy sorrel because it is good for them," McCloud noted, pointing to nutritional properties found in the drink many consume, often along with fruit cake, at this time of the year.