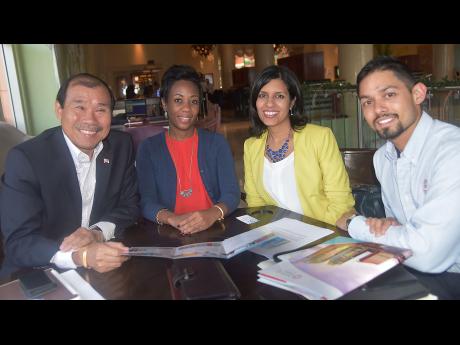 Despite a late entry in the outsourcing market, officials in Trinidad and Tobago are confident that they can become the premier destination for companies in North America to outsource their finance and accounting operations.

According to the A.T. Kearney Global Services Location Index 2017 the twin-island republic ranks the highest in the CARICOM region at 40 out of 55 outsourcing locations, and Richard P. Young, the non-executive chairman of the Trinidad and Tobago International Financial Centre (T&T IFC) says the push to attract more business is not necessarily to compete, but to complement the offerings from other nearshore locations in the region.

But the marketing activity by the strong T&T delegation, and data presented at the Outsource to the Caribbean conference held in Montego Bay, St James, recently, show an intent to make its own name.

"We believe the Caribbean region has the talent to replace leading players in outsourcing, like India and the Philippines," said Richard Young in an interview with The Gleaner.

"We are not necessarily competing with countries like Jamaica, we are giving support.

"Jamaica has done a great job as a call centre destination and has attracted a number of brand name companies, and we in Trinidad believe that we can complement this sector by what we offer in finance and accounting talent," added Young.

According to Aliyah Jaggessar, vice-president of BPO/shared services develop-ment at the T&T IFC, there are more than 2,000 fully qualified accountants in her homeland - one of the highest per capita in the world, - with another 200 graduating annually.

"In the interim, we have over 4,000 students studying accounting at any one time, as it takes several years to complete ... and that is where our labour pool for finance and accounting comes from," said Jaggessar.

"We are confident that as more and more investors become aware of Trinidad and Tobago's extraordinary competitive advantages, our country will see a tremendous surge in companies establishing their F&A BPO front offices here. The future of F&A BPO in Trinidad and Tobago is indeed extremely promising," said Aliyah Jaggessar, vice-president of BPO/shared services development at Trinidad and Tobago International Financial Centre (T&T IFC).

The T&T IFC has an annual budget of US$3 million to cover payroll expenses as well as marketing costs, and has two divisions - BPO services and the development of financial markets.

Companies performing at least 50 per cent of its services for export are also eligible for free zone status in that country.