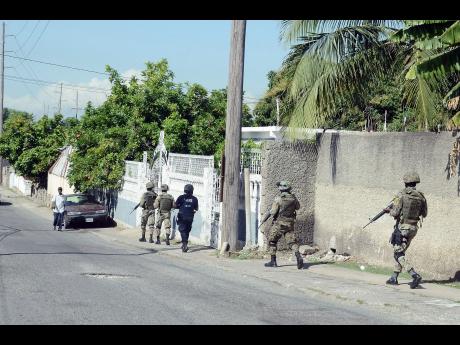 Kenyon Hemans
Members of the security forces patrolling the Mountain View community, where there has been a flare-up of violence.

Deputy Superintendent in charge of criminal investigations for the Kingston Eastern police division, Christopher Brown, has issued an appeal to warring gangsters from Goodwich Lane and Jaqcues Road in Mountain View, St Andrew not to shatter the peace within the community that has become tense due to violence in recent times.

Brown said on Wednesday that the police were yet to ascertain a motive for the Christmas Day gun attack on Goodwich Lane, which left one man and a woman hospitalised with gunshot wounds. But he said underlying issues that have existed for years was believed to have the reason for the flare-up in the community.

"It is believed to be a feud between two factions - unresolved differences over years. We are not quite sure what is behind the recent flare-up, but we want to encourage them not to break the peace into pieces ..."

The Peace Management Initiative (PMI) visited the area this morning, seeking to help resolve the issue.

The Gleaner spoke to head of the PMI, Damian Hutchinson, yesterday, and he said that his group had been working to transform Mountain View since 2002.

He said that the organisation would love to broaden its impact in communities, but there were financial constraints.

"The PMI, from 2002, has been in the Mountain View community, and we've helped to transform that community over the years. Last year, the section of the community currently affected by violence actually had zero murders. The community has been stable (where murders are concerned) over the years. This resurgence of violence is unfortunate, but we will be supporting the political representatives in seeking to bring it under control," he said.

... Heavily armed men are intent on killing each other

Julian Robinson, the member of parliament for St Andrew south East, where the warring communities are located said on Wednesday that groundwork was being done, with the help of the church and the PMI, to engage persons of influence within the community, to put a stop to the violence.

"The place is tense. What we have are heavily armed men who are intent on killing each other. The police will go in, (and the gangsters) put down the guns while the police are there, but the guns are still in there, so you have to find a way to bring lasting peace to it. The police have a strong presence in there, and we have engaged the PMI and the churches to speak to some of the people we believe can assist in finding a solution to the problem."