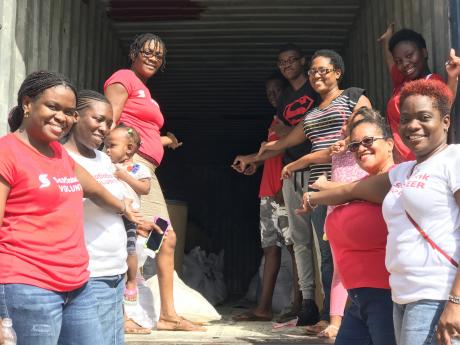 Contributed
Contributed Proof of the hard work. Volunteers stand next to a semi-filled container housing the more than 1,000 grocery parcels packed by the Scotia volunteers for the Salvation Army. 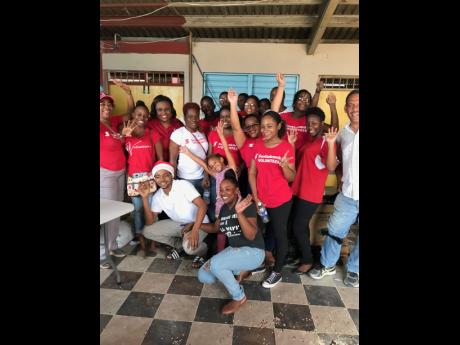 Contributed
Contributed Scotia volunteers pose for a photo after completing the packing of more than 1,000 grocery parcels for the Salvation Army.
1
2

What better way to get into the spirit of the season than by giving a helping hand to those in need? When the Salvation Army reached out to Scotiabank for their assistance with the packaging of groceries for the less fortunate, a number of staff members volunteered to give of their time.

For approximately three hours on the morning of Saturday, December 9, approximately 25 Scotia volunteers came together to help. They immediately got busy, working in assembly-line fashion to pack more than 1,000 parcels with everyday staples such as sausage, cornmeal, rice, flour, mackerel and red peas.

They sang, made jokes and chatted as they created the packages, significantly reducing the items that had initially filled the storage room.

"It's our way of giving back," said Pamela Cooper, one of the volunteers. "It's also fun, the way we work together and get as much as we can done. It's also a good opportunity to get to meet and work with other persons in the company and a great way to begin the Christmas season," Cooper said.

Scotiabank has been working with the Salvation Army for nearly 14 years, hosting the launch of the charity's annual Christmas drive and assisting with grocery packing. "We have a strong culture of giving back. It's part of our corporate culture, and Scotia volunteers have become known for assisting wherever they can," said Hope McMillan-Canaan, manager, public and corporate affairs.

At the beginning of November, Scotiabank facilitated the launch of the Salvation Army Christmas Kettle Drive, and started the donations with a contribution of $1 million.