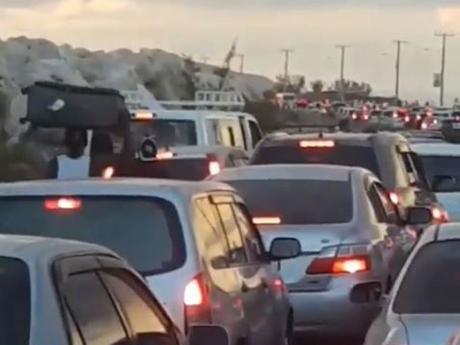 This screen grab of a video posted on social media shows a man walking through traffic along the Palisadoes strip towards the airport with a suitcase on his head.

Several persons missed their flights out of the Norman Manley International Airport in Kingston on Monday evening because of lengthy traffic delays along the Palisadoes strip, which leads to the airport.

It was the result of a daylight New Year's party called Sandz and other activities which brought on a high volume of people and motor vehicles to the strip.

Several airline passengers in a desperate bid to make their flights, got out of cars trapped in the gridlock and began walking with their luggage in hand towards the airport.

"I have been in this traffic for four hours and I have not moved 100 metres. I could have travelled from Kingston to St Mary where I live two times and still end up here. This is madness, all of a sudden, everybody keeping party out here and everybody turning up out here to watch fireworks... clearly that cannot work," a visibly frustrated female motorist said, noting that her family has missed their return flight to New York.

"Rescheduling ticket not cheap," she added.

The bumper to bumper pile up of traffic extended from the airport round-about close to the entrance of the airport to the Carib Cement Company on Michael Manley Boulevard with very little movement as unruly motorists created multiple lanes.

"You tell me now, how it can make sense for the police to give permit for people to have party there? People have flight to catch," another motorist exclaimed in the presence of a policeman.

"Any sensible person would know that road loads lead to airports must always free, because if something happen up there now and ambulance and fire truck needed, everybody dead and everything bun dung. Foolishness!"

The Gleaner was told that some flights at the airport were delayed because flight crew members were also caught in traffic.

Bicycles and motorcycles were being charted by desperate would-be passengers to get to the airport.

The police were kept busy as they sought to direct the high volume of traffic entering and exiting the strip.

One of the cops said he has never experienced such traffic build up in his seven years in the force.

"This dazzle my eyes! And it's not just today, traffic been on here since New Year's Eve and we don't even get a break to drink water, because if we move, somebody is going to try bore the line and that will cause the pile up," the cop said, further adding that the party-goers were out in their numbers to celebrate the start of 2018.

The frustration has triggered a call for the Government to consider expanding the road to four lanes on the Palisadoes strip and the authorities ban parties along the corridors.

"Believe me, it was short-sighted for them to build a new road here and only have two lanes.  It shows we don't have forward thinkers in this country," another motorist who had just exited the Habour View round-about said.

But, one party promoter who did not want to be identified said he was not in agreement with the call for parties to be banned along the strip.

He argued that parties have always been a part of New Year's Day celebration and it would kill the festive atmosphere if they were to be banned.

The promoter was, however, in agreement that the Government should look at expanding the lanes along the strip or erect a bridge from downtown Kingston over the harbour, connecting to Port Royal.