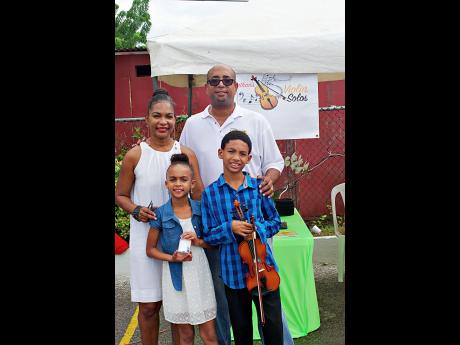 Contributed
Naomi and Nathan Campbell took a moment to pose with their parents, Sophia and Raymond Campbell at the Transformed Life Church's Bazaar. 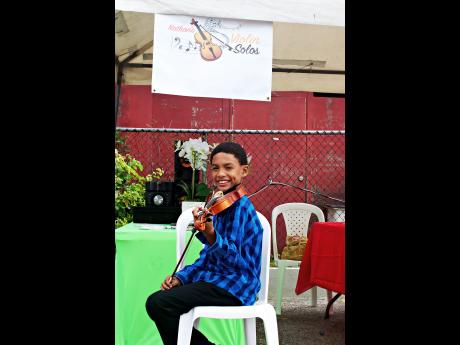 At 11 and eight years old, Nathan and Naomi Campbell have been wooing everyone they come across with their talents. Nathan has left many spellbound with his masterly manipulation of the strings of his violin and Naomi, not to be outdone, has been making a statement with the fashionable jewellery that she makes.

Their mother, Sophia Campbell, sees their talents as the suitable platform to allow her children to recognise the importance of having a skill and creating their own niche in the business world.

As such, both Nathan and Naomi were among a number of artisans displaying their products at a recent Christmas bazaar hosted by the Transformed Life Church - Nathan's Violin Solos and Naomi's By Design.

"The legacy is to leave them with a skill. I believe each person should have a skill. Some time ago, when I wasn't working, I baked and that's how I sustained myself; so, for me, it is important that they have a skill," Sophia Campbell told The Gleaner.

Nathan, who exuded much confidence during his interview with The Gleaner, said that he has no doubt that his skill as a violinist will afford him countless opportunities to make money. He said that he has played at many social and corporate events, including functions held under the patronage of Governor General Sir Patrick Allen and Lady Allen, church services, and other events held in places such as The Jamaica Pegasus hotel.

"I plan to travel the world and make a lot of money," Nathan said. "My big dream also is to win 'America's Got Talent'," he added.

"When I was three years old, I took an interest in the violin. I started out with this tiny, plastic violin that had a couple strings and I would play around with it, but when I realise that it wasn't a real one, I asked my parents to get a real one for me. I started playing basic songs and then I played for the first time on the big stage at my church."

While Naomi was busy interacting with clients at the bazaar, her mother took the time to explain her passion for fine art, including jewellery making. Sophia Campbell believes her daughter has a bright future in the industry. In fact, the lovely piece that Naomi wore on that day was her own creation.

She explained how Naomi got started.

Sophia Campbell's dream of having her children developing their skills and making their mark as entrepreneurs is not very far from reality.