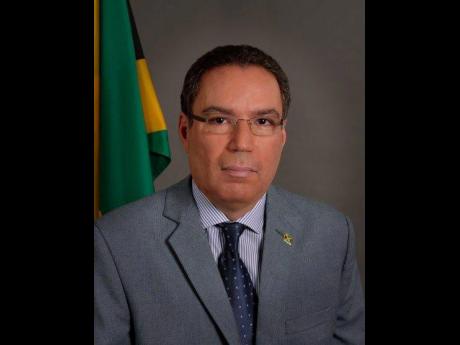 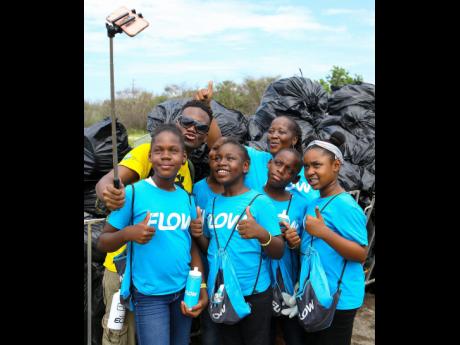 Contributed
Jamaican youth have been making their presence felt when it comes to the environment. Here, FLOW Vlogger Dutty Berry (back row, left) snaps a selfie with Shelly-Ann O'connor ( back row, right), FLOW Foundation executive and these girls to help rid Jamaica's coasts of debris on International Coastal Clean Up Day last year. The group was snapped at the Fort Rocky beach in Port Royal.
1
2

JAMAICAN YOUTH can expect to have more of a say in environmental policy issues this year, as government looks to grow its Youth Environment and Advocacy Programme (YEAP).

Colonel Oral Khan, chief technical director (CTD) in the Ministry of Economic Growth and Job Creation, said that they will kick off the programme with their first forum to be held in St Elizabeth in March.

"They (students and school administrators) have asked us to focus on climate change for that forum," he said.

At a time when extreme hurricanes are ravaging islands in the Caribbean, leaving billions of dollars in damage and lives lost, as experienced in the 2017 hurricane season, the CTD said it was a hopeful sign.

"If we can educate the next generation, we stand a much better chance of building our resilience to survive the impacts," he noted.

Impacts include not only extreme hurricanes, but also droughts; warmer temperatures and the increase in diseases, such as dengue; as well as sea level rise, freshwater insecurity and marine species extinction.

These are especially troubling for small-island states, such as Jamaica, given not only their geographical location but also their small, struggling economies.

Launched in 2016, YEAP provides a platform to youth aged 11 to 19 years old for interactive dialogue with policymakers and other stakeholders on national environmental issues.

"We want to raise the awareness of the youth so that they can take informed and constructive actions now and in the future. They should be able to advocate for themselves what it is they want," Gillian Guthrie, senior director in the Environment and Risk Management Division of the ministry told The Gleaner in 2016.

Since its launch by Minister Daryl Vaz at Holy Childhood High, the YEAP has convened, thanks to collaborative action involving the schools that host in each region, a number of fora.

According to Khan, they were last in Portland, and before that, St James and Westmoreland. Students from institutions such as St Hugh's High, Buff Bay High, The Mannings School, and Mount Alvernia have participated.

This year, they will continue with the model where one school hosts while students from neighbouring schools are invited to participate.

The programme is bankrolled by the ministry, with funds used for refreshments and clean-up after each forum. The venue, Khan explained, is typically contributed by the school while speakers are drawn from within the ministry and entities such as the National Environment and Planning Agency, the National Solid Waste Management Authority, in addition to civil society and academia.

"I wish we could do more, and that we could even have smaller groups that we could go into more detail with the students," Khan said, explaining that the programme was not without a few challenges, largely logistical.

Thankfully, he said, "we have been learning as we go along", which is why, these days, students are informed of the topics ahead of each forum.

"We genuinely want to get the youth perspective. Some of the policy issues we are working on are still works in process. However, normally when we go (to the public) on the policy papers, it is during school hours. So it is good when we can go specifically to them (youth) to get their views," he said.