197 detained since State of Emergency in St James 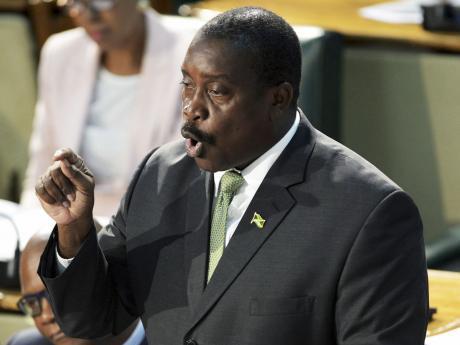 Speaking in Parliament this afternoon, Montague said among the 197 detainees are 10 men wanted for serious crimes including murder and shooting. – File Photo

The National Security Minister Robert Montague is reporting that since the declaration of the State of Public Emergency in St James on Thursday, 197 persons have been detained, and four firearms and about 30 rounds of ammunition seized.

Speaking in Parliament this afternoon, Montague said among the 197 detainees are 10 men wanted for serious crimes including murder and shooting.

Some 178 detainees remain in custody with 83 of them strongly believed to be connected to gangs in St James, according to the security forces.

In the meantime, Montague said the declaration of a State of Public Emergency is not a “cure all” to Jamaica’s crime problems.

“It is meant to cauterise the situation while providing the space for other sustainable interventions,” Montague said.

He said significant inputs from all facets of society with significant investments in social and educational systems will be required to sustainably address the problem.

Operations in support of the SOE

*Divisions within Area Five conducted a 24-hour blitz which saw increased visibility and intensified operational activities to include vehicle check points, raids, searches and visits to persons on curfew orders. Eighteen persons were detained in St Catherine North and one in St Catherine South

*Operations have been launched in St Ann, St Mary and Westmoreland

*Portmore, St Catherine has been identified as a likely area where displaced criminals are likely to be housed. A team from Counter Terrorism and Organised Crime Branch, the Fugitive Apprehension Team and Mobile Reserve conducted targeted raids on several premises. No one was apprehended.

*The Mobile Reserve and the St Andrew Central Police picked up two persons of interest in the August Town area this morning (Jan 23, 2018) in connection with a shooting in the community last night. The men are identified as Tafari Dell and Ragiet Cole.

*Continued operations by CTOC and the FAT resulted in the apprehension of two men wanted in the United States. Davy Scott, 48, who is wanted in New Jersey for assault against police and several assault offences, was held in Portmore, St Catherine. Peter Marley, 51, who is wanted in Florida for the multiple sexual offences involving minors, was held in Cherry Gardens. Both will be extradited to the United States.