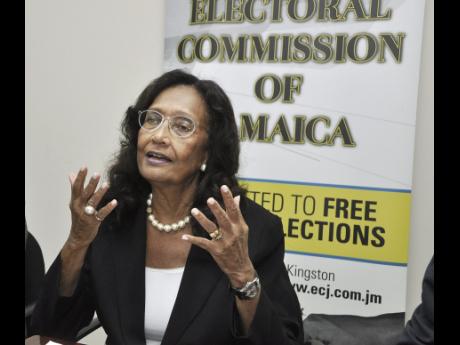 The following are excerpts of a speech by the chairman of the Electoral Commission of Jamaica (ECJ), Dorothy Pine-McLarty, at the January 15 formal launch of the regulations for the registration of political parties.

Today is indeed a significant milestone on Jamaica's electoral landscape. Jamaica as an independent nation of 55 years is still in its infancy in contrast to the world's long standing democracies, some of which have had hundreds of years to achieve many of the milestones that we have also attained. The Electoral Commission of Jamaica is pleased and proud to present the Regulations for Political Parties Registration.

This achievement, along with the accompanying legislation, cements Jamaica's position as a leader in electoral reform in the Caribbean, and is key to Jamaica's Vision 2030 Goal of transparency and accountability in governance. These are not just a set of simple rules we copied or created on a whim, but are the result of nearly 17 years of work and persistence by hundreds if not thousands of committed Jamaicans striving for the good of our country.

... Accelerator pressed on road to reforming political parties in Jamaica

The process began in 2003 with political parties registration and campaign financing being included among the key areas for reform.

It gathered momentum in 2006 when former EAC (Electoral Advisory Committee) ECJ chairman, Professor Errol Miller, spearheaded a two-day conference at the University of the West Indies on both subjects attended by the Jamaica Labour Party, People's National Party, National Democratic Movement, CAFFE, the Friedrich Ebert Stiftung Foundation, the International Federation for Electoral Systems (IFES), Elections Canada and the Carter Centre to present their views and positions on the issues. Professor Dr Wolfgang Zeh, former president of the German Bundestag, was the keynote speaker.

The conference concluded with certain principles of agreement and a few outstanding points to be addressed before we could proceed. To find relevant solutions we embarked on four courses of action:

- We requested and received technical advice from experts at IFES

- We commissioned a poll to canvas public opinion.

- We accepted the offer from FES to hold town meetings across Jamaica to seek the considered opinions of community leaders.

- We held consultations with political parties through their representatives on the commission.

The consensus was that these two substantial matters were of such great import that they deserved individual consideration and implementation by way of a two-stage approach, separating political parties registration from campaign financing.

In respect of the former, the report to Parliament was passed in 2010, the Legislation in 2014 and of course these Regulations in 2017. We then embarked on an in depth and multi-faceted 11-year process of drafts, presentations and consultations which has culminated in the passage of both pieces of legislation and attendant regulations. I well remember the comprehensive matrix prepared to ensure that all submissions, comments and the like were captured and considered.

The registration process will be outlined by the registrar from whom you will be hearing shortly.

In order to maximise the full benefits of this milestone in our electoral reform process a robust public education programme is necessary, for which the very competent EOJ team and the registrar are well suited to participate.

In closing, we are extremely proud of the outcome and feel confident that these regulations will strengthen trust in the electoral process.

Nonetheless, there is always room for improvement. Therefore, it is important that all stakeholders understand, embrace, uphold and demand the enforcement of its provisions, which we believe are vital to the health of Jamaica's democracy.