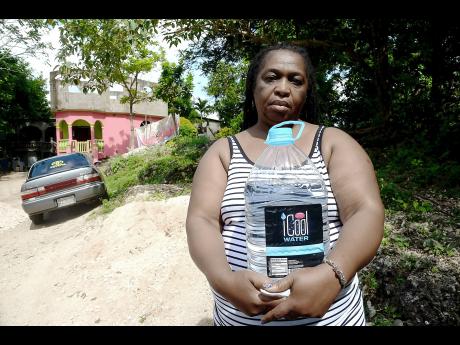 Lionel Rookwood
Ahnomia Wright clutches a gallon bottle of water she purchased for domestic use, because none is coming through her pipes. 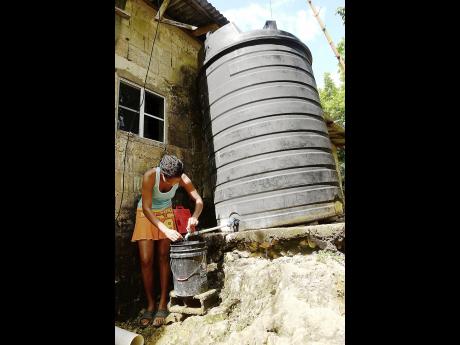 Lionel Rookwood
Narda Morant catches water, which she knows could make her sick, from a tank in Reeves Wood, Manchester.
1
2

They have lived without water in their pipes for so long that residents of Red Berry and Reeves Wood in south Manchester have forgotten what many Jamaican take for granted, turning on the tap inside their house.

These residents have learnt to depend on the rain to get water for most of their domestic use, but now they say the situation is making them sick as the rain has not been coming with sufficient frequency.

"From I build my house couple of years ago, I don't even know if the shower works, trust me. I stand up in there and bathe, but water never run out of my tap yet," said Leslie Hamilton,

She added that the community has been promised repeatedly that their water woes will soon be over, but outside of the rainwater, they rely on a single tap in the community which trickles as dozens of persons wait in queues to fill up water buckets each morning.

The trickle, however, stops around 10 a.m. and after that, residents have to fork out up to $3,000 per drum for water from private truckers.

"From 1984 I live here, and a little pipe was way down the road and another one around there. When rain fall we could get water, and them come and take them up. Now we don't have any. If you don't have a black tank you can't drink little water," fumed Cecilia James, a resident of Reeves Wood.

"We write up to get water, but we don't get none. Dem carry the little light come, but no water don't come around here. When rain fall them come full the black drum around the road, but otherwise nothing," added James as she charged that doing laundry and washing dishes are challenging tasks in Reeves Wood.

Ahnomia Wright was born in Reeves Wood but migrated to the United States. She returned home recently from Connecticut to spend a couple of days with relatives, and was made sick by the water.

"I tried to drink it and immediately it is just pure diarrhoea," she said, clutching a bottle of water she purchased from a nearby store .

Mayor of Mandeville Donovan Mitchell has pointed the finger at the National Water Commission for the water woes facing residents in some communities in south Manchester.

"They do have under-ground water, but it is a matter of the National Water Commission and its development plan as it relates to water being piped within the parish itself," said Mitchell.

"From time to time when the people come here from the Water Commission, we keep asking about the development plan. In the meantime, we as the municipality try to make sure, on an ongoing basis, that we truck water into those areas. That is the least we can do," added Mitchell.

He said that the complaints by the residents that there is no water in the tanks, and what is there is making them sick, will be investigated and preparations made to truck water to the area immediately.

This is good news for Red Berry resident Atterine Gayle. "We have been going without water for the past three weeks. There has been no water in the drum or in the pipes. For weeks now I can't even wash my clothes. Some of these clothes I have to be repeating," said Gayle.