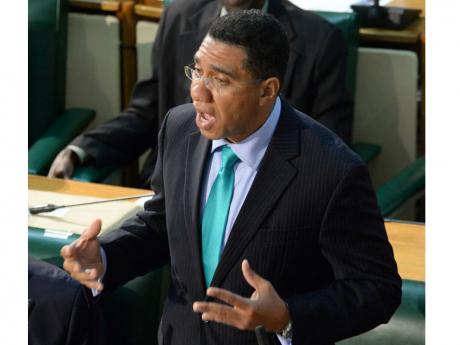 Holness ... We must take back control of our country.

The House of Representatives has passed a resolution to extend the State of Public Emergency in St James by another three months.

This means the measure would remain in force until May 2, 2018.

On January 18, Holness announced that the Governor General had declared the State of Emergency for St James, initially for two weeks.

With the extension, the security forces will continue joint operations in the western parish aimed at rooting out criminality.

Already, 10 firearms and hundreds of rounds of ammunition have been found and an illegal petroleum trade smashed.

Holness, in proposing the resolution for the extension of the State of Public Emergency said other significant operations will be pursued.

He said the operations are targeting the facilitators of the importation of guns and the operators of illegal lottery scamming.

"We must take back control of our country. We must dismantle organised crime," he said.

The Opposition has given support to the proposal to extend the State of Public Emergency in St James.

"While we sill support this, we urge that all necessary measures be taken to ensure that the situation is brought under control," said Opposition Leader Dr Peter Phillips.

"We still would want to see more of what we call the 'kingfish' to be brought to book."

In fact, House Speaker Pearnel Charles reported that all 51 Government and Opposition members of the House attending today’s sitting voted in favour of the extension.

The Senate will hear the resolution at the next sitting.