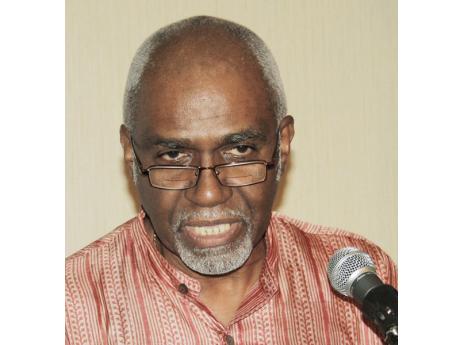 A judge of the International Court of Justice (ICJ) in The Hague, Netherlands, Jamaica-born Patrick Robinson, has joined local members of the legal fraternity in decrying the appointment of Jamaica's new chief justice in an acting role by the Government.

However, the Opposition spokesperson on Justice, Donna Scott-Motley, and the Jamaican Bar Association have since expressed their disapproval of the unprecedented move by the Andrew Holness-led administration.

In a letter to The Editor of The Gleaner, Justice Robinson says the unprecedented move, although not wrong, is close to interfering with the independence of the judiciary as prescribed by the Constitution.

The ICC judge says the appointment of Justice Sykes as acting chief judge could be interpreted as the government not having full confidence in his capabilities in the role.

Justice Robinson, who is the father of opposition PNP General Secretary Julian Robinson, argues that in such a situation the appointment should not have been made.

The internationally-respected Jamaican judge says the appointment suggests that Justice Sykes is being watched closely by the Prime Minister and that his appointment is susceptible to being rescinded at any time the Government disapproves of the manner in which he discharges his judicial function.

Justice Robinson says the government should do the proper thing by permanently appointing Justice Sykes to the post of chief justice.

The appointment of Justice Sykes to act as Chief Justice in a case where there is a clear vacancy is not in the best interest of the country, for the following reasons:

2. The practice of appointing persons to act as Judges of the Supreme Court is bad enough, but the appointment of a person to act as the Chief Judge until the Governor General is “further advised” is wholly unacceptable. The holder of that office must be seen as the leader of the Judiciary in all aspects of its work. As a quintessentially important branch of Government, the proper functioning of the Judiciary is vital for the preservation of democratic governance.

3. Those responsible for the appointment of Jamaica’s Chief Judge ought to be certain that they have appointed a person who can be relied on to discharge immediately the functions of that high office. If they do not have that certainty, the person should not be appointed at all.

5. The appointment of Justice Sykes to act as Chief Justice suggests that the appointee is being watched closely by the Prime Minister as head of the Government and that his appointment is susceptible to rescission at any time that the Government disapproves of the manner in which he discharges his judicial function. In that regard, it comes perilously close to being an interference with the independence of the Judiciary guaranteed by the Constitution. The appointment of Justice Sykes to act until the Governor General is “further advised” would scarcely appear to be consistent with the security of tenure envisaged by the Constitution for Judges of the Supreme Court. As a practical matter how is it reasonable to expect him to discharge his judicial and administrative functions if his tenure is so uncertain? Indeed, distinguished Judges in the international setting in which I operate as well as former Court of Appeal Judges in other Caribbean jurisdictions with whom I have consulted have expressed the view that the appointment of a person to act as Chief Justice until the Governor General is “further advised”could be challenged in the Courts.

6. In light of the important questions of principle raised by this wholly unprecedented action, it is irrelevant whether Justice Sykes agreed to the appointment to act as Chief Justice. The matter is not personal to Justice Sykes. It is an institutional question affecting the Judiciary as a whole as well as the integrity of democratic governance. It is plainly wrong as a matter of principle for a person to be appointed to act as Jamaica’s Chief Judge until the Governor General is “further advised”.

7. In light of the foregoing, I respectfully ask the Honourable Prime Minister to immediately confirm the appointment of Justice Sykes as Chief Justice of Jamaica.