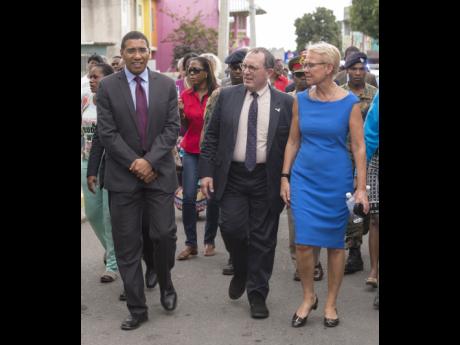 Gladstone Taylor
Stefano Manservisi (centre), director general for International Cooperation and Development in the European Commission based in Brussels tours the zone of special operations in Denham Town with Prime Minister Andrew Holness (left) and Ambassador Malgorzata Wasilewska, Head of the EU Delegation in Jamaica.

A high-ranking official of the European Union (EU) has admitted that its decision to retreat from offering preferential treatment on commodities such as banana and sugar has had a devastating impact on the region's economy.

But, Stefano Manservisi, director general for International Cooperation and Development in the European Commission, has made clear that the EU's stance against preferential treatment is not likely to change to favour Jamaica and the rest of the region.

Speaking at the Regional Headquarters at the University of the West Indies last Thursday, Director General of the European Commission's Directorate General for International Cooperation and Development Stefano Manservisi accepted that the measure implemented by the EU have hurt the Caribbean.

"Of course, it has been painful, it is still painful by the way, and probably we (the EU) could have done things in a different way, ... in a way more forward-looking. I also think that something better could have been done here in the Caribbean," said Manservisi.

But he insisted that the preferential scheme was untenable in the modern trading era. Over the past decade, several preferential trade agreements have been halted, as the EU toughened its stance against heavy subsidies, in keeping with the World Trade Organization's rules.

Jamaica and other Caribbean economies thrived off these preferential agreement; however, since the fallout, the export agricultural sector has taken a major hit.

Following his presentation, Manservisi told The Sunday Gleaner that the idea of placing the preferential trade agreements back on the table for discussion is not in the immediate plans of the EU, even has he noted the appeals from some for the agreements to resume.

"The Caribbean exporters have full access - full preferential regime through the European market - more than that is difficult," said Manservisi.

He added that the EU will have to do more in addressing other reasons why exports from the Caribbean are not increasing further, but the rules will not be changed.