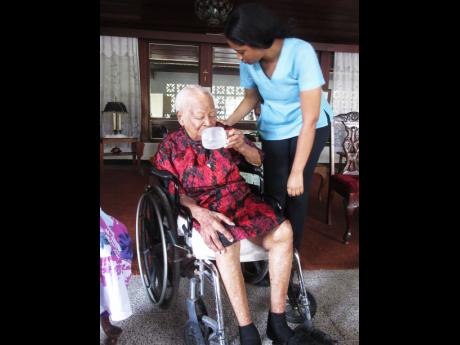 Paul H. Williams
Elise Henry feeds herself while one of her caregivers, Yanique Crawford, looks on.

Elise Henry of Havendale, St Andrew, was born in 1908. On Sunday, January 21, family members and other loved ones, some travelling from abroad for the occasion, gathered around the beloved matriarch to celebrate her 110th birthday.

This significant milestone was brought to the attention of Family and Religion by her grandniece Althea Byll-Cataria, and when our team visited, the only noticeable impairment was her inability to hear clearly. But her caramel skin, which has been cleansed by Palmolive and pear soap over the years, glowed like that of a newborn babe.

And though the memory of the wheelchair-bound elder ebbs and flows, she still remembers some details. In a clear and strong voice she listed the full names of her parents and siblings, even the ones, such as "bright eye" Laura, who died in infancy.

"And then Edna Louise. When I was three weeks old, she was three years old, and she died, and they call me Loula's killer, and the killer stick with me," she recalled. And with her characteristic dry wit, she continued, "And a kill off the whole a dem." Yes, she has indeed outlived them all.

Her parents, Nora Clementina Francis and Uriah Manassah Henry, lived in downtown Kingston at 94 Charles Street when she was born at the Victoria Jubilee Hospital. The hospital delivery happened after the maternity nurse who was on her way to attend to her mother met in an accident.

She said her father was a well-educated man who worked as a sanitation inspector, but did not like his name. So he signed all his documents UM Henry. Her parents were strict, but not "over strict" she said. Her father died aged 52, while her mother made the transition in her mid-40s, while she was nine years old. An older sibling took care of her from then.

Henry attended Chetolah Park Elementary School and recalled that in her days, girls did not fight, only boys did. So, her brother would do the fighting. After Chetolah Park, she attended Kingston Technical High School.

She spent a great part of life in the United States, where she worked as a private/companion nurse for 40 years, and another 10 years in England, before returning to the US. There, she retired for a while before repatriating to Jamaica in 1992. "She has been working all her life," Byll-Cataria said.

Henry said she does not know why she lived to this ripe age, and when her youngest caregiver, Yanique Crawford, asked her about any special diet that could have contributed to her longevity, she said cynically, to much laughter, "Same thing that everybody eat." Henry then listed rice and peas, rice and ackee, cow foot, cow nose, tripe and beans as some of the things she had eaten over the years.

So, if it is not the food, then what? Could it be the fact that she was never married and has no children?

She smiled when she was asked about marriage. Without a tinge of regret, she blurted, "No. Nobody never ask me to married them." She then put her hand to her cheek and laughed infectiously.

Henry might not have children of her own, but she has four generations of nieces and nephews, and other relatives who adore her.

"She is very proud of being a black woman ... My husband recorded her already talking about the trade union, the black movement. She used to push us to learn folk songs, Patois, very conscious of her Jamaican-ness," Byll-Cataria said.

Ahlyn Byll-Cataria, who said Henry accepted him as one of her grandnephews, is amazed by her knowledge of and passion for African history, especially that of East Africa.

But how did she acquire all of that information? Family and Religion was told that this Garveyite was an "avid reader" and has taught herself for the most part. "She has been able to draw links and parallels between different periods of history to what is happening now," Byll-Cataria said.

Part of her legacy is her strong family values, and respect for all. She is one who treats everybody equally.

"Every member of the family she has touched in some way, and has helped us along with our trials," another grandniece, Jean MaCalla, added.

Joan Green, a caregiver, said Henry is very loving, and she gets good treatment from her family, and that is why she has been with them for 16 years, and from the looks of things Elise Henry will be dishing out more love for many more years.