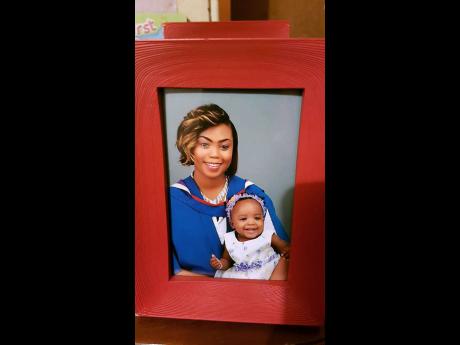 If God really gives His hardest battles to His strongest soldiers, as they say, then Anna-Kay Clayton is nothing short of a lieutenant.

Having surmounted financial hurdles and conflict at home to earn good Caribbean Secondary Education Certificate passes, she came to realise that her hardest battles were not yet behind her.

"My hope was to apply for sixth form, but at that point, my father stopped supporting me. He believed it was time for me to get a job and take care of him, but I wanted more for myself - to be more than just the ordinary, and to do something no one in my immediate family had done," she said.

Despite all the hurdles that were before her and the many discouragements hurled at her, the young woman, who said God favours her, was able to get the help she needed to complete sixth form and

later enrol in the nursing programme at the University of the West Indies (UWI), and even when the roadblocks were remounted, she pushed through and was even able to help her mother and family back home.

Clayton revealed that at the time, her mother was suffering from lupus, and as the disease progressed, she was unable to walk or help herself and that her younger sisters had to assist with the activities of daily living.

"I believe I was in denial with regard to how her condition was deteriorating because when my sister called me at work and said she died, I couldn't see how that was possible. I cried inconsolably. I loved her. I wanted to finish school and take care of her. I had so many plans," she said, adding that the news was followed by a season of grief that affecting her academics and resulted in her having had to seek counselling.

"But I was reminded that God will not give me more than I can bear. He knows best. My job started to take over my life: I wasn't sleeping, had no time to eat, and I was missing classes and group meetings. I told God that I needed to focus on my studies," she said.

Clayton told Family & Religion that she was reminded of God's favour when she received a scholarship that she hadn't even applied for and was able to quit work and finally focus on her studies.

"And then it happened: I was pregnant. In school and pregnant. A Christian and pregnant. Unmarried and pregnant. I was devastated. I cried for days, more because I knew the criticism would come. But I sucked it up and accepted that it was real and it was happening. But I was about to give up.

"In the middle of final year, I was told that I wouldn't be allowed in school until six weeks after I gave birth. This would mean missing my exams, clinical, and having to wait another year," she said, admitting that she cried at first but then decided that she would continue fighting until she finally got some good news - that they would allow her to continue.

So Clayton attended school for the entirety of her pregnancy, had her daughter, and was back at school to sit exams three weeks later, completing her internship in an additional semester and earning the highest grade she had ever earned in all her years at the UWI.

The now 24-year-old woman believes that her setbacks were for the best.

"Now, look at me! I am the holder of a degree in nursing (honours), and I didn't do it alone. I achieved this all while being the mother to my daughter. God knew I needed this little girl. She inspires and motivates me every day to never give up. My mother would have been proud.

"Never let anyone set limits on what you can achieve. What they thought was a mountain for them could very well turn out to be your valley. If God takes you to it, He will take you through it. Have faith and believe Him when He said He will not leave you nor forsake you," she advised.