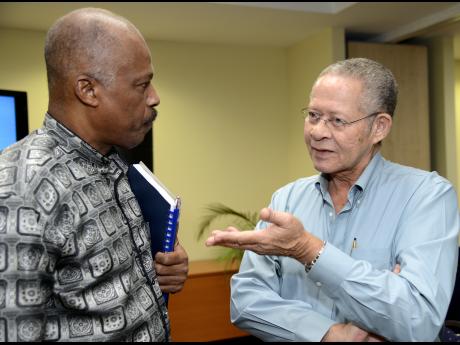 Ian Allen
Former Prime Minister Bruce Golding (right) in discussion with Vice-Chancellor of the University of the West Indies Sir Hilary Beckles during the Vice-Chancellor's Forum on the Golding Report on CARICOM-Jamaica Relations last Friday.

Former Prime Minister Bruce Golding is calling for greater transparency in the financial affairs of the CARICOM Secretariat.

Golding, who chaired the commission established by Prime Minister Andrew Holness to review Jamaica's relations in the Caribbean Community (CARICOM) and the Caribbean Forum (CARIFORUM), last Friday told a vice-chancellor's forum at the University of the West Indies Mona campus, that his team experienced difficulties in finding relevant fiscal data about the regional bloc data to make informed assessments.

"None of you could go on the Web now and download CARICOM's budget, it's a classified document, and you couldn't do that to any of the other agencies," said Golding.

In its report tabled in Parliament recently, the Golding Commission noted that the CARICOM Secretariat had said that the financial information it gleaned from regional agencies be excluded.

That position was strongly opposed by commission member Kevin O'Brien Chang, who is quoted in the report as arguing that Caribbean taxpayers have a right to access the information.

"For the CARICOM Secretariat to flatly reject the fundamental principles of transparency and accountability is in my view unacceptable. It has no legal or moral authority to seek to suppress information that was freely, as it should be, sought and given," asserted Chang.

Golding added: "We were shocked to learn that some of these bodies have never produced audited financial statements. All that is produced are in-house financials and people will look at it, and so on."

The commission has proposed that an auditor general be appointed to monitor the financial management and gauge the operational efficiency of the CARICOM Secretariat and related agencies and institutions.

It is also proposed that there should be a direct reporting relationship with the Heads of Government and the report made public.

In the meantime, UWI Vice-Chancellor Sir Hilary Beckles argued that the Golding Commission's report is rooted in the frustrations experienced since the Ramphal Report: Time for Action report in 1992, and concerns regarding the lack of implementation of the CARICOM Single Market and Economy since 2001.

"We make reference to this 'implementation deficit disorder' in our region, simply because this region is one of the most deeply researched regions in the world. There is hardly anything we need to know about this region that we do not know," said Beckles.

"There are reports, counter-reports on all aspects of our predicament, but we do not implement effectively," added Beckles.

The Government has already indicated that it does not support all the 33 recommendations of the Golding Commission but will await a debate in Parliament before indicating which will be implemented.