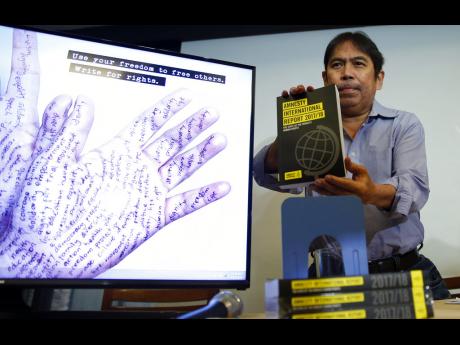 In its annual report released yesterday, Amnesty International states that unlawful killings – some of which may amount to extrajudicial executions – continued to be carried out by the police with impunity.

The report, titled The State of the World’s Human Rights 2017/18, states that Jamaica continued to have one of the highest homicide rates in the Americas, highlighting that police data showed that between January and June of 2017 homicides increased by 19 per cent compared with the same period in 2016.

It further highlighted that between January and March the Independent Commission of Investigations (INDECOM) received 73 new complaints of assault and documented 42 killings by law enforcement officials.

The report says during the year, 168 people were killed by law enforcement officials, compared with 111 people in 2016.

It noted that female relatives of those allegedly killed by the police continued to battle an underfunded, sluggish court system in their fight for justice, truth, and reparation.

Meanwhile, Amnesty International has taken note that Jamaica has failed to set up a national human rights institution.

It says despite committing to it, Jamaica had not established the mechanism by the end of 2017.

Last May, Justice Minister Delroy Chuck indicated that work was advanced on establishing the institution.