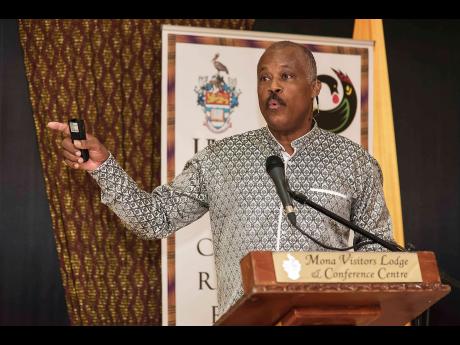 Chairman of the Caribbean Community (CARICOM) Reparations Commission, Professor Sir Hillary Beckles, has taken sharp aim at the British government over what he said has been their hypocritical stance against the movement for reparation for slavery, though the former colonisers continued to pay out millions of pounds to settle a massive slave loan up to three years ago.

On February 9, it had been revealed by Her Majesty Treasury that a £20-million loan, used to compensate slave owners at the abolition of slavery in 1833, was being paid back up to 2015.

"In 1833, Britain used £20 million, 40 per cent of its national budget, to buy freedom for all slaves in the Empire. The amount of money borrowed for the Slavery Abolition Act was so large that it wasn't paid off until 2015. Which means that living British citizens helped pay to end the slave trade," a tweet from the official Treasury twitter account detailed.

That amount has a present value of a whopping £15 billion.

The tweet was later deleted following a firestorm it had set off, with many condemning its tone and expressing their disbelief that their taxes were being used to pay back beneficiaries of slavery.

Sir Hilary Beckles, chairman of the Caribbean Community (CARICOM) Reparations Commis-sion and vice-chancellor of the University of the West Indies, has said that the admission from the British Treasury that former colonies continued to pay for the abolition of slavery was further evidence that slavery is not of the distant past and irrelevant. This fact, he said, is contrary to position taken by British politicians, such as former Prime Minister David Cameron in his address to the Jamaican Parliament in September 2015. Cameron refused to enter in reparation talks with the Caribbean.

"His thesis was clear, 'slavery is in the past, let's forget it, let's move on, the people of the Caribbean should get over it.' And that there is no benefit to either side or to humanity by addressing this matter in the formal sense. In other words, the position of the British government was that they have moved on, and that they have long moved on from this matter.

"The research, however, has now shown the prime minister of Britain, in making this presentation to the Parliament of Jamaica and the people of the Caribbean, that his thesis was deceptive," the reparations commission chair charged.

Sir Hilary lashed Cameron, arguing that at the time of his presentation in the Parliament, he was fully aware that the Bank of England and the Treasury were still paying persons who still held the bonds which financed the payback to slave owners, and the controversial issue had, in fact, not moved on.