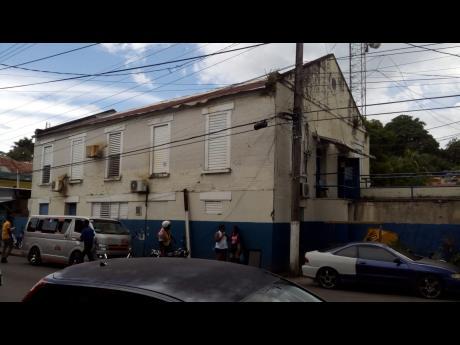 File
The dilapidated structure that houses the Port Antonio Police Station in Portland.

Ground was broken on Friday for the construction of a new police station in Port Antonio, Portland to replace the existing dilapidated structure.

National Security Minister Robert Montague, who was accompanied by West Portland Member of Parliament (MP) Daryl Vaz to the groundbreaking event, along with a team from his ministry, spoke about the need to preserve the parish's status of being the safest islandwide.

"Under adverse working conditions and with limited resources at their disposal, the police with full cooperation from its citizens, have done a marvelous job," said Montague.

"Today we are breaking ground to signal the start to the construction of a new facility, which will adequately house the hardworking men and women of this station, who were previously exposed to the most extreme and deplorable conditions," he added.

For his part, Vaz said: "Changes are coming to Portland and this government will be directing a lot more resources to this parish, so as to improve the basic infrastructure and to enhance the lives of the people."

According to the West Portland MP, the Ian Flemming International Airport will undergo major upgrade and expansion, so as to accommodate regional and international flights, which will allow for smooth access into Port Antonio, which is the cradle of tourism.

"There were days when this facility was under the threat of being closed by the ministry of health. Today, I am sure that all Portlanders are pleased that a new look station will be built," he concluded.