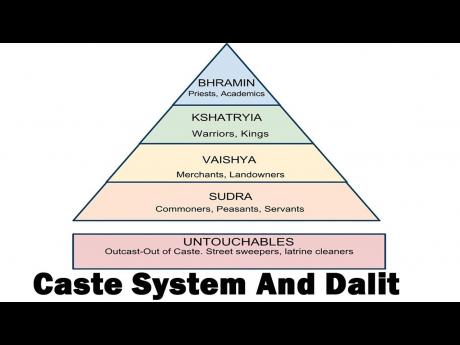 As I approached the Kali Temple in Tacarigua, Trinidad, I was hesitant, mindful that I would be one of the few, if not the only, Afro-Trinidadian there.

Maybe I was being self-conscious, but in my early 20s, I had heard enough canards of the seething racial divide between blacks and Indians. Although the distrust never ruptured into all-out clashes, I couldn't help but feel a sense of uneasiness when I was introduced to the temple's pundit.

The pundit was a very dark-skinned, robust, rotund man. He was engaging, affable, and with aplomb. He was a legend, a man renowned for working miracles. "I would teach you everything you want to learn, in the same way I teach my sons," he said.

Then, he uttered a few telling words that spoke volumes of race, colour, and caste in the Caribbean. "No Brahmin will ever teach you because of your race. I will, because I am dark-skinned and understand racism in my own Indian community." Decades later, these words have remained close to my bosom.

Days later, I was further unglued by my friend's anguish. He was Indo-Trinidadian. His angst was palpable as his amorous overtures were spurned by a woman who claimed to be a Brahmin, the highest caste. My friend's surname gave him away. He was no Brahmin.

While caste is downplayed, for the most part, in the Caribbean, in India it remains a stain on the conscience of a society which is on the cusp of modernity and superpower status. The economic and social impact of the caste system is self-explanatory.

Its psychological effects are painfully enduring.

Of this social pathology, A. Ramaiah writes in his provocative article, 'Dalits' Physical and Mental Health: Status, Root Causes and Challenges'?:

"[S]uch a notion of inferiority or superiority of individuals, of one caste over the individuals of another, is not based on any objective or empirical reality. The members of the upper caste had nothing tangible to qualify their claim as upper castes, and similarly the members of the lower castes had nothing tangible to prove their given lower caste status.

"Yet, both the upper and lower castes continued to believe in their given ... status as true and unshakeable. This unshakeable belief that the caste system created in the minds of members of every caste which is not based on objective reality is considered to be a mental illness in the field of psychology (that is) called-delusion which in the present context may be called cast-delusion."

According to Hindu lore, the caste structure is a predestined reality; that one is born into a particular caste based on past deeds. Karma is, therefore, an irrevocable determinant.

At the pinnacle of this stratification is the Brahmin - a privileged caste - the very head of society comprising priests, holy men, and scholars, said to be the voice of God, the epitome of virtue, reason, and ethics.

They are followed by the Kshatriyas (also called Rajanyas, who are rulers, administrators and warriors), the Vaishyas (artisans, merchants, tradesmen and farmers), and Shudras (labouring classes).

The untouchables or Dalits are classless, the victims

of discrimination and even violence.

Trinidad-born pundit, Rakesh Maharaj, resides in Queens, New York. He is measured and learnt in Hindu sciences and I have always sought his counsel on religious matters.

On the troubling subject of caste, Pundit Maharaj concedes that ostracism of Dalits, or untouchables, is not sanctioned by the Holy Books of Hinduism and that caste and hierarchy as mentioned in these scriptures have been coloured by culture, political greed, and personal interpretation.

While Pundit Maharaj upholds that Brahmins have earned their position due to their spiritual wisdom, he states that every social stratum is a reflection of God's all-encompassing make-up.

"No one is outside the parameters of the divine - humankind, nature, animals, the cosmos - everything ... so to discriminate against any one group is never sanctioned by the scriptures. The universe is God; collectively, all form of life is God personified."

Kings and officials in society sent their children to learn from this class. Overtime, he

Pundit Maharaj believes that the hold that caste once had in Indian society is gradually loosening. "It's more evident in rural areas," he notes. "The language and culture in the south is different to what is experienced in the north, for example, northerners speak Hindi and Sanskrit, while southerners speak Tulug.

Indeed, with globalisation, access to education, migration, government support, and the growing clout of human-rights organisations, the fortunes of untouchables are gradually changing.

Still, the process is grindingly slow. Customs and behaviours do not change overnight, especially when they threaten religious-political power and the status quo.

Not unexpectedly, the caste system left its mark on the diaspora where Indians were brought as indentured servants after the manumission of African slaves.

"While it is true that some in the Caribbean still give credence to caste, it's difficult to determine the true caste of Hindus," says Pundit Rakesh.

"It is insufficient to use one's surname to prove one's caste. For example, a Brahmin is determined by lineage. Key questions must be answered: Was there a pundit in your ancestry? Who was your guru and godfather? There must be extensive research to ascertain the validity and authenticity of one's lineage."

Still, many claim to be Brahmins because of stature and monetary rewards.

And of Dalits - the untouchables, Pundit Maharaj asserts, "You can't be born an untouchable because of karma. Life is cyclical. If you study the principles of reincarnation, a Brahmin in this life does not guarantee the same position in the next incarnation."

And while Pundit Rakesh rejects that race and colour do not dictate one's caste, I cannot help but think that during the British Raj (when the Crown ruled the Indian subcontinent between 1858 and 1947), that colour, race, and caste had become almost indistinguishable.

Editors' Note: In the Religion & Culture article, 'Truths cannot be silenced!' - Jamaican psychologist talks religion, spirituality, and her personal journey, published last Sunday, it was not clear that Audeya Fuller does not embrace mysticism, neither does the book In Light of Truth: Grail Message.

- Dr Glenville Ashby is the author of the newly released, The Mystical Qigong Handbook for Good Health.Feedback: glenvilleashby@gmail.com or follow him on Twitter@glenvilleashby.