A life of transformation awaits over 100 youths this summer 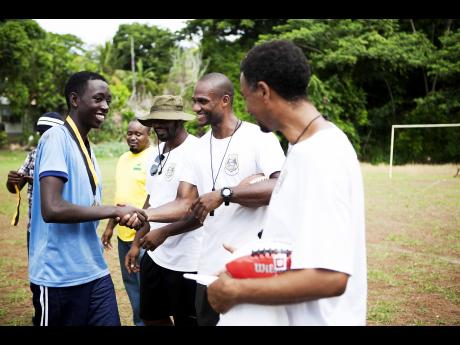 Contributed
Executive members of the Jamaica American Football Association greet a youngster who participated in the organisation's camp in Negril in recent years. From left: Kavaun Hinds, director of communications; Olanzo Jarrett, director of marketing; Brian King, coach; and Robert Wolcock, director based in Negril, Westmoreland. 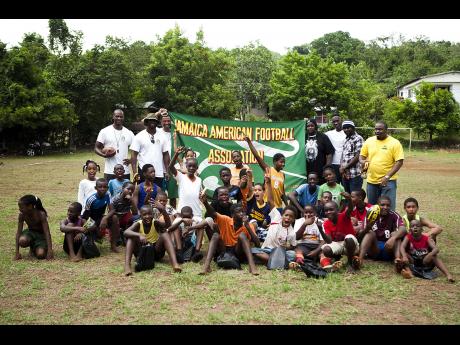 Contributed
Executive members of Jamaica American Football Association and youngsters from Negril, Westmoreland, who participated in a football summer camp in recent years
1
2

Over 100 youths across the island are expected to have their lives transformed this summer, as the Jamaica American Football Association (JAFA) is preparing to host an eight-week football camp which will provide life development mentorship and opportunities for young people to advance their sporting skills.

Olanzo Jarrett, co-founder of the JAFA, said having been established in 2014, they have been able to see at first hand the potential that lies within Jamaica's youngsters and wants to be one of the many platforms which will empower children to achieve.

"What football culture has done in North America has given some of the most impoverished children an opportunity to unleash their God-given talent and to create a sustainable pathway, which will help them for the rest of their lives. It takes a special athlete to play this sport, and I feel that our island has been blessed with tremendously great athletes," Jarrett told The Gleaner.

"This is just another platform for some of our athletes to display themselves beyond the island. Our goal is to reach some of the more challenged neighbourhoods in giving them opportunities to have a further reach beyond their community. We are here to develop some of these talents and we do that through mentorship and nutrition."

He also said one of the organisation's major objectives is to dispel the notion that football is only for males. Jarrett also pointed out that the camp, which will feature a number of coaches from North America, will be targeting children under 14 years old.

"Football is not a male-dominated sport. I feel that it has been extremely liberated. There are more women who are interested and participating in football. It shows what the game can do for women. It's a true champion sport and it gives persons the opportunity to not only be individual leaders but to also lead a group of leaders. Football is a military game but it is a game of life," Jarrett pointed out.