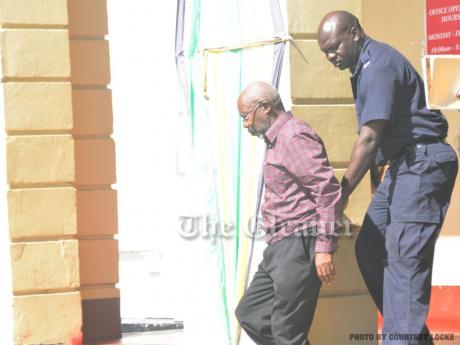 In this file photo, former Moravian pastor Rupert Clarke was being led from the St Elizabeth Parish Court building.

It’s the question that has been asked over and over on social media today: Why was prominent former Moravian pastor Rupert Clarke only sentenced to eight years in prison having pleaded guilty to two counts of having sex with a minor?

The Sexual Offences Act prescribes up to life in prison and a minimum 15 years for an adult in authority found guilty of having sex with a person under the age of 16 years.

It further describes an adult in authority as a person of trust, a title that would be applicable to a person like Clarke as a pastor.

Fifteen years is the maximim sentence prescribed for other offenders convicted of having sex with a minor.

Prosecutor Adley Duncan explains that while, in fact, Clarke may be regarded as an adult in a position of trust, in law, it might have been difficult for the prosecution to prove it in relation to the two sibling complainants since the 64-year-old Manchester minister was not their pastor.

"The prosecution did not indict the file to reflect section 10 (1) (4),” said Duncan, an Assistant Director of Public Prosecutions, citing the Sexual Offences Act.

He said, however, that in passing sentence, Justice Martin Gayle did consider the provision for the minimum 15 years for an adult in a position of trust.

Duncan said too that the judge also took into consideration that Clarke pleaded guilty on the first relevant date which entitled him to a discount of up to 50 per cent under the Criminal Justice Amendment Act (2015).

Clarke has been ordered to register with the Sexual Offender Registry.