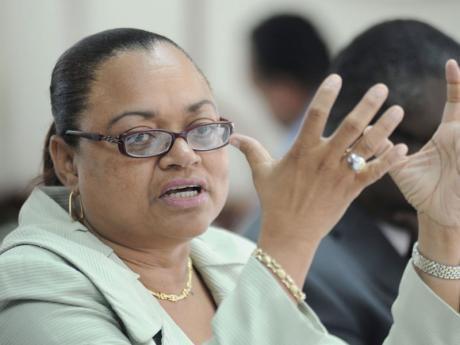 Davis Whyte ... the move by the government is tantamount to union busting and could lead to workers becoming disenchanted with their unions.

The President of the Jamaica Confederation of Trade Unions (JCTU) says she has written to Prime Minister Andrew Holness urging him to reconsider the move to pay the wage increase agreed with some public sector workers to others who have not yet signed the deal.

Teachers are currently on sickout to protest the move as well as the failure of the government to increase its wage offer.

JCTU president Helene Davis Whyte told Beyond the Headlines on RJR 94 FM yesterday that the group has pointed out to the Prime Minister that the proposed payment is not in keeping with good industrial relations practice.

She also said it’s in contravention of the International Labour Organisation (ILO) convention on collective bargaining.

She said if the government does not relent, the JCTU will be duty bound to report the matter to the ILO.

Sign up for The Gleaner’s morning and evening newsletters.
President of the Jamaica Confederation of Trade Unions, Helene Davis Whyte

According to Davis Whyte, the move by the government is tantamount to union busting and could lead to workers becoming disenchanted with their unions.

The Jamaica Teachers' Association (JTA) has taken issue with the payment this month of the five percent increase, which will cover the first year of the four-year deal.

It says the move is unprecedented in light of the fact that the current salary negotiation has not been concluded nor a Heads of Agreement signed.

The JTA says if the payment is made this month it would view the action of the finance ministry as being tantamount to union busting and a breach of Collective Bargaining Rights.

Finance Minister Shaw has insisted the payments have to be made before the end of the fiscal year.