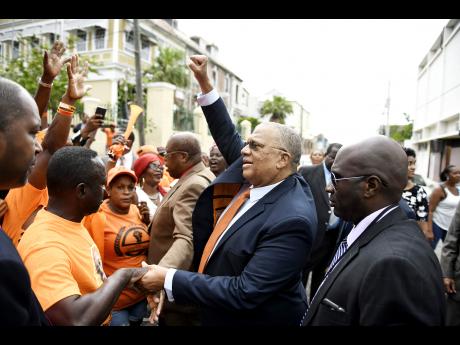 Where was Phillips' main focus?

Dr Phillips main focus was on Jamaica's present situation, He highlighted the challenges that face workers today, including permanent workers who have been relegated to contract employment and have, as a result, lost their pension rights and rights to maternity leave, among other rights. The Government, he explains, has lost the respect for collective bargaining indicative of the handling of wage matters related to the teachers, nurses, police and other civil servants. Healthcare was highlighted as the next pressing issue, including the mismanagement of the renovation of Cornwall Regional Hospital in Mt Salem.

He then asked the question: Could Jamaica have been better today?

He began to take praises along with his administration for the country's positive economic indicators: low inflation, debt

He outlined that the strong foundation set by his party has been hampered by continued low growth, taxes, corruption, and violent crimes. Dr Phillips explained that in his opinion, the Government made a bad decision to increase the income tax threshold to $1.5 million. It increased the nominal salary of some civil servants, including teachers and nurses and so on, but came at a cost to the country of $31 billion in new taxes. The Government forfeited $4 billion in bauxite revenues over the last two years but increased tax last year to facilitate the increase in the income tax threshold. There was no mention that taxes will not increase for the 2018-2019 FY. Most of the analysis was in retrospect. He highlighted possible incidence of corruption, the $600-million debushing programme and the $243-million used-car purchase where the bulk of the cars are yet to be delivered. Violent crime was highlighted as a major deterrent to progress. How did the country get there? The murderers are mainly from broken single-parent homes and curtailing crime requires a unified approach.

No more tinkering, time for radical transformation to restore hope

Dr Phillips outlined that his party doesn't adhere to the notion that economic transformation rests solely on the nation's ability to maintain macroeconomic stability, but rather on a restructuring of social arrangements that continue to create barriers to upward social mobility for the poor and has helped to maintain social and economic inequality. He outlined their mission to empower people.

Dr Phillips went all the way back to the Michael Manley days in the 70s to highlight absenteeism as a major problem to educational improvement of many, which he plans to combat by providing one meal per day for every student in every school. He explained that a cadre of social workers should be trained and employed to advise how to improve nutrition and stimulation in these homes. He also promises an Institute of Excellence to provide leadership training to students from non-traditional high schools.

Dr Phillips explained that the present structure of land tenure in Jamaica reflects a pattern of inequality. More than 700,00 people or 25 per cent of the country's population live on squatter lands and 60 per cent of farmers have no land titles. He highlighted that the Government can solicit funds from the NHT to formalise, provide infrastructure and translate squatter settlements into legitimate residential areas.

It is their intention to transform Jamaica into a modern, inclusive and globally competitive economy. It will transition trough empowering small and medium-size businesses by increasing access to cheap capital and convincing banks to use intellectual property as collateral.

To him, Jamaica has to make its democracy work, claiming that recent behaviour by the Government with regard to wage negotiations, especially as it related to teachers, among other actions, is signalling that Jamaica's democracy is under threat.