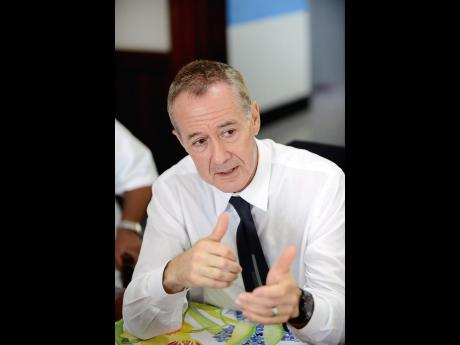 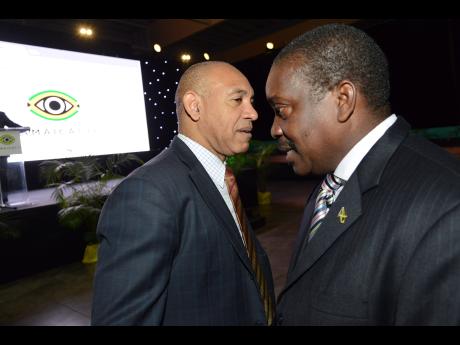 Rudolph Brown
Minister of National Security Robert Montague (right) in discussion with Commissioner of Police Antony Anderson at the launch of the JamaicaEye initiative on March 14.
1
2

"Excellent idea" is how the National Security Ministry's JamaicaEye closed-circuit television network initiative is being described by Professor Anthony Clayton.

Speaking to The Sunday Gleaner recently, Clayton stressed that such a centralised system could easily alleviate the stress of a high attrition rate within the Jamaica Constabulary Force.

"We simply do not have enough police officers to put on every street corner, and we never will. But now, with the camera technology, we don't need to. What you do is put up as many cameras as possible, and then we can indeed have a policeman watching, in effect, on every street," said the Alcan Professor of Caribbean Sustainable Development at the University of the West Indies.

"London is one of the most camera-intensive cities in the world, and other countries are now catching up. A lot of private householders and private businesses are putting up cameras of their own, and the police can get access to their records. Most criminals are caught that way than most other means, after there is a major crime or attack. The whole thing is on film, and it is much easier to identify perpetrators."

As part of the Government's anti-crime plan, earlier this month it launched JamaicaEye - a national closed-circuit television surveillance programme geared at improving public safety and disaster response. The public-private partnership is designed to network digital cameras installed by the Government, as well as private individuals and companies covering public spaces. Footage from the feeds will be used in relation to criminal activity and other emergencies and will be monitored by a team of security professionals.

United Kingdom, France, and China already have a similar system in place.

MUST BE A NAT'L INITIATIVE

While persons have been showing interest in getting on board one week after the programme's launch, National Security Minister Robert Montague told The Sunday Gleaner on Thursday that his vision is to see as many businesses and households as possible signing up with JamaicaEye, because it would be too expensive for the Government alone to take on the task.

"People have been calling and have been registering, but we need more people on board. The more people, the better the system will work. This is a chance for citizens to help. The man with the restaurant, the man with the bank, stores, and gas stations, who have cameras that can connect to the Internet. We are appealing to them to go on to the website, jamaicaeye.gov.jm and register their cameras. Give us the feeds," said the minister.

"At a minimum, it would cost US$45 million to do Kingston, so the Government won't be able to put up cameras on every light post and street corner. We have installed 182 cameras and we have ordered some more, but we are mainly concentrating on hotspots and intersections. While we have cameras on some main roads in May Pen, Mandeville, Negril, Ocho Rios, Montego Bay, and Kingston, that can be viewed from one location, we also need eyes on community roads and in apartment complexes."

For those worrying about having to go to court to confirm that their camera was responsible for capturing footage of crimes, Montague said, "The amendments to the Evidence Act of 2015 already allows video footage to be admitted in court, because there was a case in St Ann where there was a tape of a murder being committed, but the person ended up getting away. The person who took the video didn't come to court to testify that his camera took the footage. We don't need the owners anymore, because the amendment now allows video footage to be admitted in court."

Key features of the JamaicaEye programme include:

- Persons and businesses with digital surveillance cameras pointing in the public domain can sign up by visiting jamaicaeye.gov.jm.

- Images not showing any threat will be stored for 30 days after being passed through a data analytics system.

- Personnel having access to the system's database have been put through lie-detector tests, and rugged background and security checks.

- Periodic audits will take place to keep check on who logs on to the system and does what.