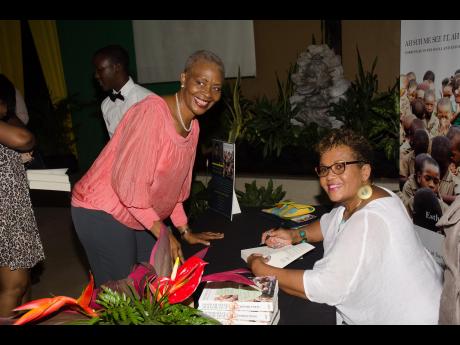 Shorn Hector
Dr Andrea Blackwhood Harriot (left) is all smiles about getting her book signed by her former high school classmate-turned-author, Esther Tyson, at the official launch of her book "A Suh Me See it, A Suh Me Say It" on Sunday at the Christian Life Fellowship Church in St Andrew.

Unapologetic about some of the toes she has stepped on in her pieces as Gleaner columnist, notably, a few attacking the raunchiness in the music of the now-incarcerated Vybz Kartel, Esther Tyson has held firm and has successfully launched her first book.

Titled Ah Suh Me See It, Ah Suh Me Say It, the book encapsulates eight years' worth of her discussion-provoking articles in The Sunday Gleaner, touching on issues from educational practices and family structure, to society's values and dancehall's impact on society.

She stressed at the launch on Sunday, at the Christian Life Fellowship in Gordon Town, St Andrew, that her views were not always popular among a few, but she refused to give victory to a "loud minority".

"The best known issue I have addressed as an opinion columnist was the matter of the daggering music. I have been called all sorts of things because of my views, but I still stand by them. Do not allow a loud minority to make represent-ation, as if they are reflecting views of the majority. This would be allowing a delusion to become a reality, and it will, if it is insistent enough, without counteracting voices that say the opposite," Tyson told those who turned out in her support.

This was a piece to which Kartel responded, saying "the devastating impact on the psyche of Jamaican children is not caused by the daggerin songs, but rather by socio-economic conditions ... cultivated by our politicians in the 1960s-'70s."

Tyson, a former principal of two Corporate Area high schools (Ardenne High and Tarrant High) began her journey as a renowned Gleaner columnist in 2007, but decided to apply brakes to that mission in 2016, for not wanting to seem repetitive to her audiences.

"Why did I stop writing in 2016? I realised some of the issues remained the same, but my views also remained the same. I thought I would be repeating myself if I continued writing articles. I, therefore, decided to write a book with all those views, making them available to all who would wish to read them. What's next? This is the first book of others I have in me that I intend to write," she said.

The 472-page book can be bought at Kingston Book Shop and Sangster's Book Stores locations islandwide.