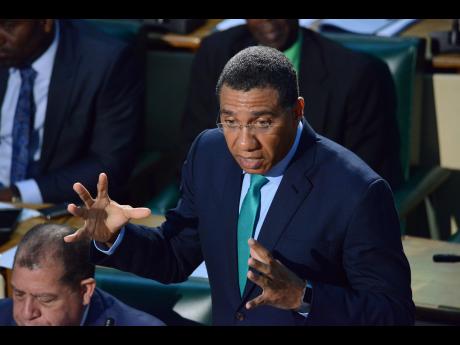 Last week, the prime minister gave his contribution to the Budget Debate for the 2018-2019 fiscal year. Mr Holness declared that he had brought his family to Parliament, which

should indicate his long-term commitment to the nation. His speech was in three parts - Part 1 was on 'Simple action that can make a big difference'; in Part 2, he addressed the economy, infrastructure and housing; and for Part 3, he addressed security.

... Simple actions that can make a big difference

In this section, he looked at energy, poverty and solar Initiatives. The focus here will be to put measures and policies in place to improve housing facilities, renewable energy sources, and create a cleaner environment across the island. The initiative, he outline, should provide a real opportunity for social enterprises to support the ecosystem around the production, installation, user education, servicing and recycling of renewable energy products.

The prime minister emphasised that HOPE has secured $60 million through the Development Bank of Jamaica to increase training and placement islandwide; $28 million from the CHASE Fund will go to the Jamaica Information Service to help digitise the archives which contain several decades of video footage, photographs and audio files. Persons from the HOPE programme, employed to work on the project, will receive the necessary media archive management skills and intellectual property management training beforehand. According to the prime minister, this initiative should provide these young people with marketable skills and experience that will increase their prospects for long-term employment.

Mr Holness reiterated that, of the US$68 million, only 20 per cent of the loan is for NIDS; the remainder of the funds will be used to update the infrastructure, etc. The Government plans to embark on a comprehensive public education system regarding NIDS.

Part two of his presentation was on the economy, infrastructure and housing. Here, he began with the plan for action in business process outsourcing (BPO). He highlighted the advancements the country has made thus far and outlined plans to continue the improvements in the 2018-2019 fiscal year. He explained that the Government has signed off on a partnership initiative to develop a comprehensive BPO campus on lands at Old Hope Road in St Andrew that will consist of 300,000 square feet of purpose-built BPO space and will be accompanied by retail, medical facilities and other amenities. Approximately 4,000 new seats and 8,000 new quality jobs will be provided by the new BPO complex.

Mr Holness highlighted that the Government will embark on several new initiatives and continue those already initiated including launching in April 2018 a 63,000-square-foot BPO facility in Montego Bay Free Zone that will accommodate 1,500-2,000 new employees, as well as another BPO/KPO Campus being constructed at the Portmore Informatics Park, with more than 160,000 square feet that will employ about 4,000 people and many more across the island.

The Government will amend the Registration of Titles Act, the Registration of Titles Cadastral Mapping and Tenure Clarification (Special Provisions) Act and the Limitation of Actions Act, among others. From the National Housing Trust, $2 billion will be used to provide registered titles to 20,000 parcels of land over a three-year period. Through systematic land registration, each landowner will pay a lower cost per parcel, while at the same time more registrations can be done in a shorter period of time.

... Action in logistics and ports

The Government has the objective to increase the viability of Kingston as a competitive trans-shipment port in the region. Now that the developments are at an advanced stage, the Government will focus its attention on developing the lands adjacent to the port into a modern, competitive near-port logistics centre. Plans are also in place to develop a cruise shipping terminal at Port Royal and to improve the ports in Montego Bay and further expand the reach of the ports established in Falmouth and Ocho Rios.

The Government is putting plans in place to build at least 22,00 housing solutions over a four-year period up to 2020.

In an attempt to improve the level of security across the island, the Government will amend the Firearms Act in Parliament. A watch list will be developed for long-term gang members, and other measures necessary to enhance security.

In conclusion, Mr Holness highlighted that the Government is taking positive actions to secure the future of our people.