PNP councillors going ahead with no-confidence motion despite mayor's resignation 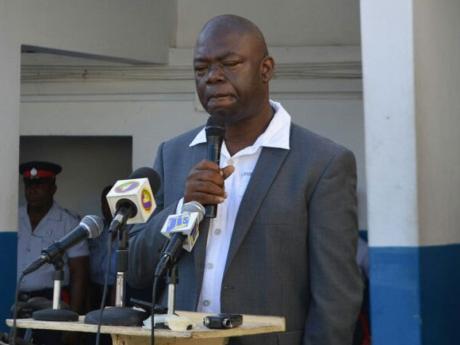 Lenworth Rawle ... his departure comes ahead of a meeting on April 3, at which a no-confidence motion was expected to have been moved against him

The Minority Leader in the St Thomas Municipal Corporation Hubert Williams says the decision by the Local Government Minister to appoint Michael Hue as mayor will not thwart efforts to change the leadership at the council.

Hue, who was the deputy mayor, was yesterday appointed mayor and chairman of the St Thomas Municipal Corporation following the sudden resignation of Lenworth Rawle.

Rawle's departure comes ahead of a meeting on April 3, at which a no-confidence motion was expected to have been moved against him and Hue.

The minority caucus has argued that the leadership of the council is untenable as Rawle and Hue accepted the Jamaica Labour Party's Dean Jones as councillor for the Yallahs Division despite the fact that his election was illegal.

The Supreme Court last week nullified Jones' election because he was a civil servant at the time local government polls in 2016 and this is not permitted under the Representation of the People Act.

With the Yallahs seat now vacant, the PNP controls five divisions in St Thomas to the Jamaica Labour Party's four.

Speaking with The Gleaner Williams, who is also the councillor for the White Horses division, said Rawle’s resignation is as an attempt to "overpower" the motion of no-confidence that is to be moved against him and his now former deputy.

However, he said the move will not work.

"What they are trying to do is let the mayor resign so his deputy can assume the role but bear in mind that a notice of no-confidence was also served to the deputy mayor," Williams said.

"So it's like you get a traffic ticket and refused to pay on the date specified but when it's out of the tax office's hands, then you try to pay but it doesn't work like that. You have to face the court . So at this point in time, the deputy (Hue) has to face the council and the motion that was served," Williams said.

He said too that Hue can only ascend to mayorship if the council votes in his favour.

Williams said the PNP councillors will be moving forward with the motion of no-confidence against Hue despite the new developments in the municipal corporation.

"The date was already set by the mayor (Rawle) and the agenda for the meeting has already been prepared," he said.

Calls to both the Rawle and Hue have gone unanswered.