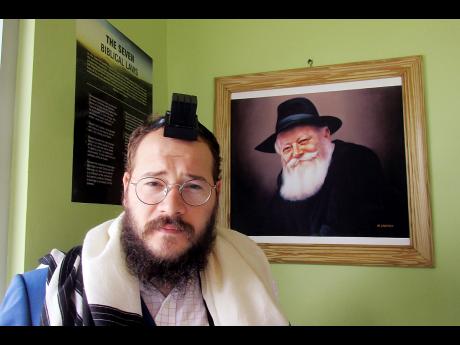 In the Jewish religion (Judaism), a rabbi is a trained teacher of the Torah, who has studied all his life. The Torah is the central reference of Judaism. It has a range of meanings, including the first five books (Pentateuch) of the Hebrew Bible, or the totality of Jewish teaching, culture and practice.

It consists of the origin of the Jews, their call into being by God, their trials and tribulations, and covenant with God, which involves following a way of life embodied in a set of morals, religious obligations and civil laws.

Among the Jews in Jamaica there is only one rabbi, Yaakov Raskin, and recently Family & Religion spoke with him about his training and the work that he is doing in the Jewish community.

Rabbi Raskin was born and raised in Montreal, Canada, one of seven siblings. He said he has been studying Judaism since he was 13 years old, and between ages 18 and 23 he did his tests to become a rabbi.

As a young rabbinical student he said he dedicated his life to the "wellsprings" of Judaism, near and far. He travelled around the world visiting various Jewish communities and organising Jewish outreach missions in Africa, France and throughout the Caribbean.

He said there are two types of rabbis, one who has a synagogue-hired, full-time job, to communi-cate and be there for the people. The other rabbi, in addition to being a teacher, is a leader who builds the community. Rabbi Raskin falls in the second category. "I am building the community over here in Jamaica," he said.

He teaches Jewish residents and tourists, hosts synagogue services every week, runs different holiday programmes which need a rabbi to run. "On a day-to-day basis, I have my rabbi work, and then administration work," he explained.

In order to serve the needs of the local Jewish community and Jewish visitors to the island, Rabbi Raskin and his wife, Mushkee, operate Chabad Jamaica, a "one-stop Jewish shop" located along Gloucester Avenue in Montego Bay, St James. It is a place for everything Jewish, he said. He initiates and directs holiday services, provides kosher meals, make home visits, and teaches adults and children.

DOOR OPEN TO ALL JEWS

A Chabad is a worldwide movement that caters for the spiritual and material needs of all Jews. In Jamaica, its mission statement says: "Chabad of Jamaica's doors are open to every Jew, regardless of background or affiliation. It is a place where questions are embraced and Judaism is observed meaningfully and joyfully."

It is about the sustenance of the Jewish culture in Jamaica, as Rabbi Yaakov Raskin and his wife said, "Chabad strives to keep the Jewish Jamaican heritage alive." As such, it offers a range of programmes and activities including Jamaica kosher, under the supervision of Rabbi Raskin.

In the Jewish culture, kosher is food that is clean and fit for human consumption. Established in 2014 Jamaica kosher is prepared daily, and catering is provided for special occasions, such as birthdays, weddings, and anniversaries.

Other accomplishments include the opening of the first synagogue in Montego Bay since 1914, and the first Jewish restaurant and welcome centre in the Caribbean. At present a building, "the first large permanent acts of goodness centre", is under construction. It which will include a synagogue, social hall, library, Jewish heritage museum and a restaurant.