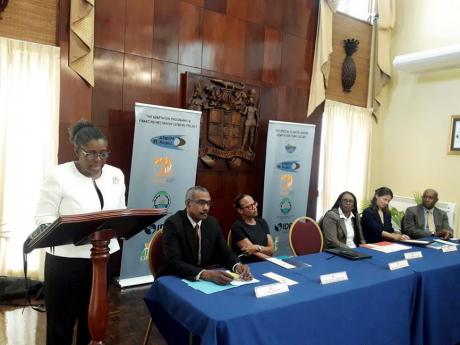 Contributed
Permanent Secretary in the Ministry of Economic Growth and Job Creation (MEGJC), Audrey Sewell, addresses the signing ceremony for the National Spatial Plan at the Office of the Prime Minister in Kingston on Tuesday. Looking on are Chief Technical Director at the MEGJC Colonel Oral Khan, Therese Turner Jones, representative of the Inter-American Development Bank (IDB), Dr Winsome Townsend, project manager for the Adaptation Programme and Financing Mechanism, Olivia Palin from Acclimatise, and Senator Aubyn Hill. 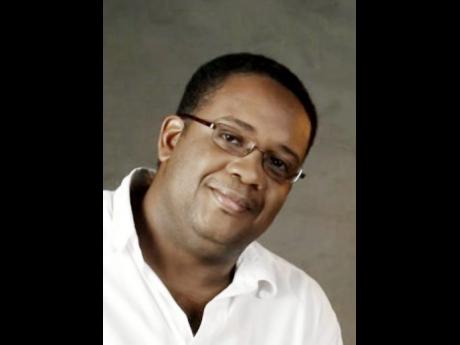 NEWS OF a national spatial plan (NSP) that takes account of climate change and which has been some time in coming has been greeted with mixed views from civil society and academia.

"The NSP is very important and it would be great if Jamaica could develop a good one which effectively takes into consideration and addresses the expected impacts of climate change on our small island," said Suzanne Stanley, chief executive officer for the Jamaica Environment Trust (JET).

"However, JET is concerned about how long it has taken us as a nation to get to this point. It is our understanding that Jamaica's last national plan ended over two decades ago, and stakeholders have been speaking about the development of a new plan for over a decade. During this period, Jamaica has been effectively operating without an organised approach to development, which is evidenced by several poor planning decisions and the observable deterioration of our natural environment," she added.

Thanks to funding to the tune of US$872,000 from the Adaptation Programme and Financing Mechanism (AP&FM) of the Pilot Programme for Climate Resilience (PPCR), this is expected to be a thing of the past. Government has inked the deal for seven technical papers, to be completed over 14 months, to inform the plan that has been in the works since 2009.

Audrey Sewell, permanent secretary in the Ministry of Economic Growth and Job Creation, explained that the project to develop a NSP was originally established through a grant agreement between the Caribbean Development Bank (CDB) and the Government of Jamaica, and scheduled to be implemented between November 2010 and May 2012.

"However, due to various constraints in terms of both the CDB and GOJ funding, the Government revamped its approach to the financing of this critical initiative, with the aim of obtaining a workable output within the shortest possible time," she explained Tuesday.

"The Planning Institute of Jamaica and the ministry saw the opportunity to include the NSP in the Adaptation Programme and Financing Mechanism project, which is being funded by the Climate Investment Fund through the Inter-American Development Bank. It fits very well within this project, which seeks to strengthen the resilience of the island through a range of climate change adaptation initiatives," Sewell added.

Eight years on, the plan is in motion, with climate change considerations an essential part of the mix.

"We would be negligent if we did not prepare for unpre-cedented weather events. The NSP will address the major challenges of climate and disaster risks, while protecting the environment, improving natural resources management and enhancing the quality of the built environment. The NSP will guide spatial planning and development at the national, sub-national and local levels by guiding the preparation of local development plans and development orders," Sewell revealed.

"From my understanding of what is to be achieved, the incorporation of the latest and best knowledge of how climate change will impact Jamaica in the development of a national spatial plan is a welcomed move," he told The Gleaner.

"As climate change scientists, we have long argued that climate change is a developmental issue for SIDS (small island developing states) like Jamaica, and that climate change information and science must be mainstreamed into developmental planning. To the extent that this represents a recognition of this, makes this a significant announcement, not just because it means the message is getting across, but because, if the stated objectives are achieved, it will help in the building of a more resilient Jamaica to the impacts of climate change," he added.