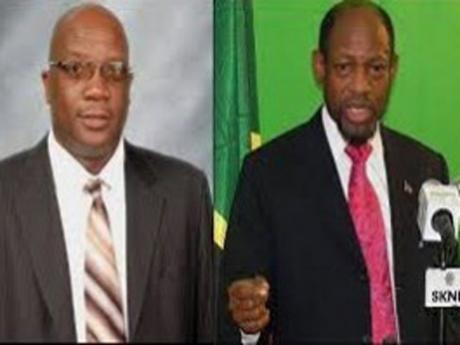 BASSETERRE, St. Kitts, Apr 200, CMC – A High Court judge today set May 30 for the start of the case in which the St. Kitts-Nevis government is seeking to oust former prime minister Dr. Denzil Douglas from the Parliament on the grounds that he is a citizen of the Commonwealth of Dominica.

The St Kitts-Nevis government, through the Attorney General, Vincent Byron, is seeking a declaration from the High Court that since the election to the National Assembly on February 16, 2015 Douglas became disqualified from being elected as a member of the National Assembly and was accordingly required to vacate his seat by reason of his becoming a person who, by virtue of his own act, is in accordance with the law of Dominica, under an acknowledgement of allegiance, obedience or adherence to a foreign power or state, namely, Dominica.

Prime Minister Dr Timothy Harris has described the matter as one of grave constitutional, political and parliamentary significance to the Commonwealth.

When the matter came up for hearing today, Justice Trevor Ward ruled that submissions should be made by May 11 with the matter to be heard on May 30.

Senior Counsel Anthony Astaphan, who is a member of Douglas defence team, said that his client had agreed to disclose the number of times that he had travelled on the diplomatic passport “because he said in his evidence he had, in fact, used the passport for convenience and travel….

He told reporters that he had agreed with Trinidadian-based Senior Counsel Douglas Mendes “that we would disclose in writing the number of times Dr. Douglas travelled, dates and so on and that after that is done we will submit the diplomatic passport to the judge for him to verify that the information that we are volunteering is accurate.

“Our initial position was that the Court had no jurisdiction to compel us to disclose anything and that is why the order before the judge was by consent ….and not mandatory or any order by the court imposed on us” he added.

Astaphan said that the media report “gives further support to us on Dr. Douglas side that this is all a piece of political manoeuvring to try score political points perhaps where things are not going the way the Honourable Prime Minister and his government would wish to go”.

Douglas has already indicated that the outcome of the Court matter will enable the main opposition St Kitts-Nevis Labour Party “to settle down and pursue a spirited election campaign to remove the dictatorship from this land led by Prime Minister Dr Timothy Harris”.