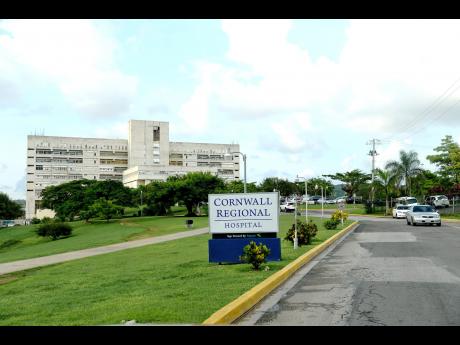 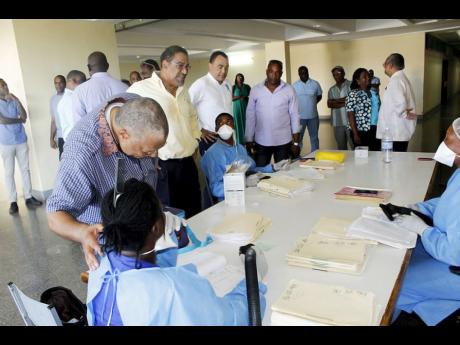 While nurses, doctors, patients, and other stakeholders who have been exposed to noxious fumes at the Cornwall Regional Hospital in Montego Bay, St James, continue to agonise about the possible long-term effect of their exposure to contaminants, partisan politics appears to be sucking out a great deal of seriousness from the issue.

Last Wednesday, a team from the opposition People's National Party (PNP), led by its president, Dr Peter Phillips, toured the problem-plagued hospital and came away calling for a public enquiry.

Within 24 hours, a team from the Government, led by Health Minister Dr Christopher Tufton, was at the Type A hospital, defiantly declaring that there was no need for a public enquiry.

Phillips argued that a public enquiry was necessary to determine why the 400-bed hospital was not closed on the recommendation of experts, adding that Jamaicans needed to know who had overturned the technical recommendation and left the staff and patients to the health challenges that arose.

But Tufton quickly rejected the call and argued that the focus should be placed on rehabilitating the hospital with a view to getting it back up and running in short order.

"I don't see any need for an enquiry," said Tufton. "We need to get on with the work to repair the hospital, rehabilitate it, and get it functioning as it ought to function, and it has been brought into this position over many years because of a lack of support for the institution."

But even as Phillips and Tufton threw jabs, health professionals who were based at the hospital were more concerned about the possible long-term health challenges they may face.

"I am having respiratory issues that my doctor believes are as a result of the exposure," said one nurse, who lost consciousness after she first experienced a tightening in her chest, coughed up blood, became disoriented, and then collapsed.

The impact on the health professionals has sparked reports that the Jamaica Medical Doctors' Association (JMDA), the Nurses Association of Jamaica (NAJ), and the Jamaica Workers' Union are contemplating legal action on their behalf.

"In our meeting with the JMDA, that was one of the recommendations that we placed on the table," a doctor, who wants legal action to be taken, told The Sunday Gleaner.

"The more we hear about the concerns that caused the Pan American Health Organization (PAHO) to recommend the immediate evacuation of the building last year, the more worried we are ... the long-term effect could be anything from chronic illnesses to death."

While indicating that she did not want to become involved in the partisan squabble, one nurse told our news team that she was siding with Phillips' call for enquiry.

According to the nurse, while the enquiry might be too late for Cornwall Regional, the findings could help to prevent a similar situation at other local health facilities.

"The matter must be thoroughly investigated and the truth told," said the nurse. "A clear understanding of what is happening at Cornwall will put this Government and future governments in a position to learn from experience."

In his call for a public enquiry, Phillips said that the JMDA, the NAJ, the pharmacology unit at the University of Technology and other universities should be part of the board of enquiry, which should look at accountability, impact, rehabilitation, and recovery.

Like Phillips, Tufton expressed a desire to get to the bottom of the issue, which has left western Jamaica without its only Type A hospital.

According to Tufton, he plans to do a case study on what is now a major health crisis facing the Mt Salem-based hospital.

"I intend to commission a case study on the Cornwall Regional, and part of that is to determine the reason for the lack of maintenance and how not to get here again," said Tufton.

Based on investigations carried out by PAHO, moulds, fibre particles, and other contaminants, which were displaced as a result of the efforts to clean and rehabilitate the problematic ventilation system, are at the heart of the ongoing air-quality issues at Cornwall Regional.

With the main building at Cornwall Regional now evacuated belatedly and the doctors, nurses, and patients now operating in safer surroundings at the Falmouth Hospital, in Trelawny, and in makeshift facilities on the grounds of the embattled hospital, the hospital now faces an uncertain future.