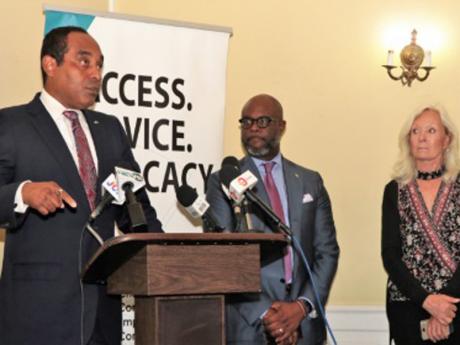 Environment and Housing Minister, Romauld Ferreira, said his ministry is working to develop a phase-out plan for single-use plastics.

“We will also move to make the release of balloons into the air illegal as they end up in our oceans, releasing toxins and injuring marine life.

“Additionally, we will become a signatory to the Clean Seas Campaign, which was launched in January 2017 by the United Nations Environment. It aims to increase global awareness of the need to reduce marine litter by engaging governments, the private sector, and the general public, Ferreira said.

He said that with the assistance of a diverse group of environmental professionals and other stakeholders, including the Bahamas Chamber of Commerce, the government will embark on a nation-wide public consultation and educational outreach campaign.

“We will visit communities and schools, hold town hall meetings and meet with businesses to gather valuable data that will assist us in developing a fair and reasonable phase-out plan by 2020 and associated legislation,” he said.

“In the coming weeks, we will be reaching out to businesses that have already incorporated sustainable food products into their daily operations. As the Minister of the Environment and Housing, I must commend your efforts to take responsibility for how your business impacts our environment. Thank you.”

Ferreira pointed out that, with the assistance of the chamber, his ministry would also start meeting with restaurants, suppliers, importers and various food vendors.

The Ministry and the chamber also signed a Memorandum of Understanding (MOU) on the initiative.

“To engage students, I’m pleased to announce our logo competition for students ages 13 to 18. Logos that represent our plastic and styrofoam ban initiative are to be submitted via email by June 4th, at 4 pm. The competition flyer will be shared through the media and on our Facebook page.”

Ferreira noted that The Bahamas is a “delicate” country with an extensive marine environment that is fundamental to its health and economy.

“For decades, human activities have negatively impacted the marine environment resulting in the death of coral reefs, the collapse of fish populations and marine pollution. Coupled with this, we have the prevailing challenge of finding waste management solutions that must be tailored to our small size, but meets our needs within a modern economy.”

Ferreira said that, like many other countries, The Bahamas has an “exacerbating” plastic problem that held significant economic and environmental costs.

He cited a study conducted by the Ellen MacArthur Foundation which found that at least eight million tons of plastic waste ends up in the world’s oceans each year and will remain there for at least a century.

He added that, according to the study, by 2025, it is projected that there will be one ton of plastic for every three tons of fish, with plastic trash eventually outweighing fish in the oceans.