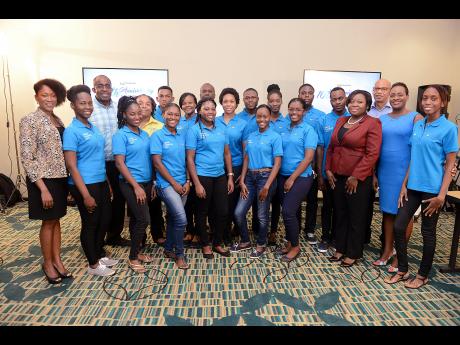 With $40 million set aside to cover grants, bursaries and scholarships to primary- and tertiary-level students this year, the NCB Foundation is easily one of the biggest providers of scholarships for Jamaican students and their families who are in need of assistance to continue their studies.

But, despite the amount that is spent annually, it is not nearly enough to provide scholarships for the approximately 10,000 tertiary-level hopefuls who apply each year, according to Jamilia Crooks, the programmes administrator at the NCB Foundation.

"One of our major areas of focus at the foundation is education. We have three areas of remit, but education is what takes up more than 65 per cent of our budget," Crooks disclosed.

It's with education in mind that the foundation is back on board as a major sponsor of The Gleaner's eagerly awaited Scholarships To Go feature, which becomes available on May 1.

According to Crooks, tapping into the sponsorship of Scholarships To Go was a natural extension to the foundation's marketing drive to make more Jamaicans aware of its offerings. She observed that Scholarships To Go was "something that people really look forward to and they anticipate to see opening dates, bursary amounts, programmes that we (NCB Foundation) would be supporting and that kind of thing. So we use this (sponsorship) as a primary means to get the word out", Crooks explained.

The programmes administrator said scholarship recipients are drawn from the University of the West Indies, University of Technology, the teachers' colleges, Caribbean Maritime University, and the Edna Manley College for the Visual and Performing Arts.

Crooks told The Gleaner that each August, two of the 14 recipients stand a chance of being selected national champions. These recipients are given an additional $200,000 towards their studies.

Meanwhile, she was full of praise for NCB Chairman Michael Lee-Chin, whose vision she said made the scholarship programme possible. "That's why we invest so much in education, because he wants to see an average Jamaican child being able to have the opportunity to attend university," she said.

She told The Gleaner that three broad criteria are used to select from the thousands of applications received each year. These are academic performance, community involvement and household need.

"Every year, we get a lot of applications from people who really want to go to school. They are doing really well, but they just don't have the resources," said Crooks.

She continued: "A component of our scholarship programme is that we actually go to their houses to surprise them and their parents when they actually become the parish champion. It's a very rewarding thing because sometimes when we go to the houses they live in and see the dilapidated conditions, some of them don't have food, but then they're doing so well in school. We see them on paper initially, because at the outset they are just an applicant ... but when we actually get to know them and really know their stories it's a very rewarding feeling," said the programmes administrator.

"This is a programme that we really cherish at the foundation and most of our scholars, they always give back to society; and they always turn out to be successful and end up contributing to nation building in all spheres of life since 2008, when the programme started, until now," she added.

Crooks said the amount of money the foundation receives is based on the profitability of the bank each year and when persons swipe their KeyCards. Like other sponsors, Crooks is urging other corporate entities to become involved as there is a "great need for scholarships and there are many bright and needy students just waiting for an opportunity to continue their education."