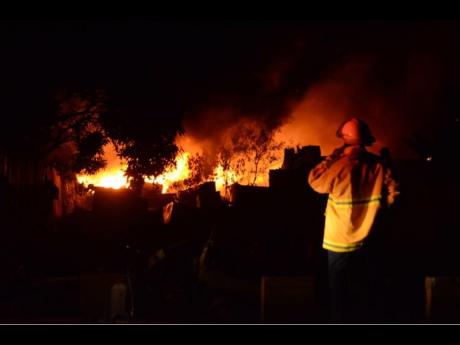 Kenyon Hemans
A firefighter assesses the raging fire near the community close to the Riverton disposal in western St Andrew last night.

After an all-night battle, fire fighters have extinguished a massive fire in a section of Riverton City in St Andrew Western.

The fire began around 11 o'clock on a large area where tyres were being stored.

"It's the first I ever see such a big fire. It was like a volcano just rolling in," said resident Deon Williamson.

However, she said none of the houses in the informal settlement was damaged.

Several fire units and a Jamaica Defence Force helicopter responded to the blaze, dumping hundreds one gallons of water on the furnace before it was brought under control.

Williamson said an adjoining area which housed several pigs was also affected, killing all the animals.

"Mi feel it fi him," she said in reference to the pig owner.

Williamson said although none of the informal houses was damaged, residents had to contend with unbearable smoke.

Fearing the worst, many people had evacuated items of furniture out of their houses to secure them.