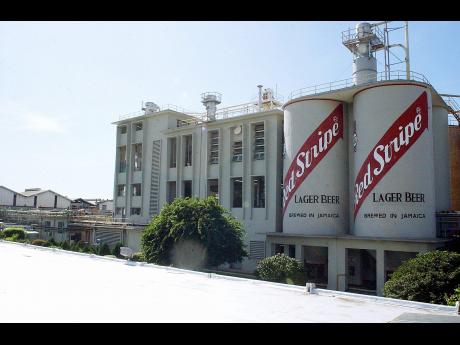 With 2,256 acres of cassava under cultivation, 98 Learning for Life graduates and 15 per cent of the imported starch used in its malt, beer and stout beverages sourced from locally grown cassava, Red Stripe is taking cultivation of the root tuber to another level. To this end, the company has been generating employment through training and certification of young Jamaicans in good agricultural practices.

In addition to those farmers gainfully employed on the four Red Stripe-operated farms in St Catherine and Clarendon, 121 third-party contract farmers cultivate a combined additional 1,300 acres of cassava. Where necessary, those outgrowers are provided with start-up farmer kits comprised of planting material, irrigation equipment and fertilizer for the first year. They participate in ongoing training, consistent with the company's stringent adherence to agricultural practices of the highest quality.

On a recent field trip to Wallen, the company's latest acquisition in rural St Catherine, workers were engaged in a range of activities on the 250-acre property where cassava was at various stages of cultivation. The 37 employees, most of them from Wallen, Time and Patience, and Cheesefield, were observed planting, weeding and fertilizing the more than 10 varieties of cassava.The Brown Colombian, ideally suitable for mechanised harvesting because of its propensity for most of the roots to form closer to the surface, is the number one choice. Add to that the fact that it bears very well and is very hardy. However, the Blue Bud, a local strain which is also hardy and shows strong resistance to pests, shares pride of place, according to crop production supervisor Michael Williams.

'I really enjoy doing it because hard work brings success'

Tamesha Brown and Kaysha Gordon were two of the women outfitted in hats, long-sleeved tops, pants and gloves, well equipped to cope with the rigours of the job.

Brown, who was unemployed until she responded to the call from Project Grow, graduating in 2015, has taken well to the on-the-ground demands of the job, relishing as she does the path to economic independence it affords.

"It is hard work and I have actually taken to it very well. I never knew I could be out here in the bushes, but I've come to love it," she told The Gleaner. "Sometimes it's challenging, hard, but no work is easy. Everyone has challenges at times. So I cope with it. It's okay ,so far."

For the Cheesefield resident, gathering and taking the cassava sticks, which are cut prior to mechanical harvesting, is the hardest part.

She explained: "You have to pull them out, and sometimes, that can be challenging. My challenging part is to take out a bundle of sticks coming from all the way down there, come up here, but not all the times."

For Gordon, who now takes pride in her crop maintenance skills, the job presents an opportunity to put into practice things learnt in the classroom settings of Project Grow and which have improved her marketability.

After two years and four months on the job, her growing expertise is a source of pride, as well as income.

"This includes fertilizing, weeding, scouting - looking for insects - and so forth," the 29-year-old explained. "I really enjoy doing it because hard work brings success.

"I was at home doing nothing when I heard about it and signed up. When I got the call, I was really excited. At that time, the only thing I knew about farming was to just dig a hole and put a stick in it."

More than two years on, the Wallen resident still looks forward to and enjoys the 15-minute walk to work.