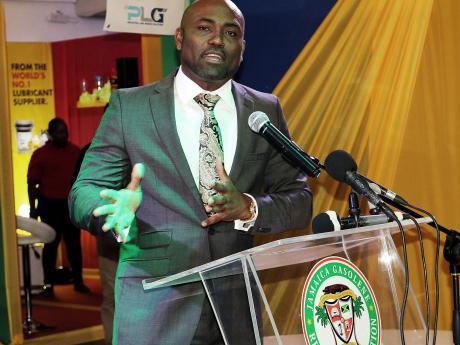 Science, Energy and Technology Minister Dr Andrew Wheatley has indicated that the Government is contemplating an increase in the percentage of ethanol used in petrol, in order to reduce emissions in the environment.

“We’re not there just yet (but) I have asked my team at the Ministry and at the Petroleum Corporation of Jamaica (PCJ) to see how best we can increase it,” he said, at the recent launch of Total Jamaica’s Excellium fuel at the Spanish Court Hotel in New Kingston.

Ethanol is a clean-burning, high-octane fuel that can be produced from common crops such as corn, sugar cane, potato, cassava and hemp.

The fuel reduces greenhouse gas emissions by as much as 50 per cent in comparison to gasoline, and keeps harmful chemicals like petroleum additive, MTBE, out of the air.

Currently, service stations across the island offer E10 fuel, which is a blend of 10 per cent ethanol from sugar cane in both 90 and 87 octane gas.

Wheatley said that many other countries are offering a 15 per cent ethanol blend.

He noted that increasing the percentage of ethanol content in the local fuel blend “will lead to a reduction in the carbon footprint and (will) not interfere with the overall performance of the motor vehicle”.

President of the Jamaica Gasolene Retailers’ Association (JGRA), Phillip Chong, told JIS News that he would welcome the move by the Government.

“There is absolutely nothing wrong with it. It would be an attempt to keep the rising (fuel prices) down. As the price of fuel increases, we have to get a bit more innovative in finding ways to reduce cost. Ethanol was originally introduced on that premise and leaves a better footprint where the ecology is concerned,” he said.

Meanwhile, Wheatley and French Ambassador to Jamaica, His Excellency Jean-Michel Despax, who was also at the launch, lauded Total for introducing Excellium to Jamaica.

Total’s Excellium is a new generation of high-tech fuel optimised with specific detergent additives to clean and provide lasting protection to the engine’s vital components, resulting in up to 93 per cent less build-up for diesel engines and up to 99 per cent less for gasolene engines.

The result is improved efficiency in fuel use and fewer polluting emissions in the environment.